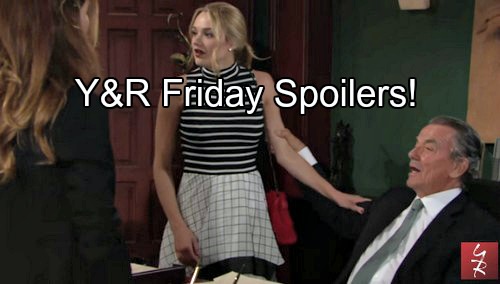 The Young and the Restless (Y&R) spoilers for Friday’s episode, July 29, tease that Cane’s (Daniel Goddard) move will get a mixed reaction. We’ll learn he signed a lease to make Brash and Sassy the new tenant at Jabot. They’ll be using some spare office space, which means Cane and Billy (Jason Thompson) will be right downstairs.

Jill (Jess Walton) will flip out when she hears the news. She’ll want Cane to get out of the agreement. Phyllis (Gina Tognoni) will also warn Billy that this is a bad idea. Nevertheless, Billy will support Cane’s decision. He’ll argue that they got a good deal on the space.

It seems Billy won’t mind being close to Phyllis on a daily basis. However, these two will quickly run into trouble. When Billy finds himself alone with Phyllis on an elevator, he’ll press the stop button and lean in for a kiss. The temptation is just too strong for our forbidden lovers.

At Newman Enterprises, The Young and the Restless spoilers say Victor (Eric Braeden) will happily get back to work. Nick (Joshua Morrow) and Victoria (Amelia Heinle) won’t be pleased when Victor urges them to take a vacation. They’ll feel like they’re already getting muscled out.

Once Summer (Hunter King) shows up, Victor will ask her to return to the company. He’ll suggest that he can train her. Summer will mention her relationship with Luca (Miles Gaston Villanueva), but Victor may be willing to overlook it. He’ll indicate that Summer was loyal when the rest of the family betrayed him.

Summer will take some time to think about the offer, but doubts about Luca will creep in. She’ll recall when Nick warned her about Luca’s manipulation. Perhaps Summer is worried that Luca could still be playing her. Meanwhile, Jill will urge Victoria to accept a position of leadership at Brash and Sassy.

Elsewhere, Nick and Jack (Peter Bergman) will debate whether or not Victor will go after Phyllis. Nick will note that he hasn’t heard Victor say anything about vengeance. Jack will want to protect Phyllis if possible. He’ll feel like they’re finally working through their issues and they don’t need Victor to create another problem.

Speaking of problems, Kevin (Greg Rikaart) is facing a big one. He won’t know if he should believe Chloe’s (Elizabeth Hendrickson) story about hooking up with some guy in California. Kevin will realize that Bella’s (Cali May Kinder) age would line up with the timing of his parting sex with Chloe. He’ll continue to ask questions, but Chloe will simply toss him out of her hotel room.

Later, Mariah (Camryn Grimes) will get updates on the Chloe situation and urge Kevin to seek the truth. They’ll confront Chloe together at Crimson Lights. When Kevin insists on getting a paternity test, Chloe will state that she’s fine with it.

Back at the hotel, Victor will grow impatient with Chloe. He’ll stop by to remind her that the journal entries need to resurface right away. Chloe will threaten Victor with exposure, but he’ll advise against it. Victor will point out that Chloe knows what he’s capable of. Do we fear that Victor will go after Chloe’s custody of Bella as Y&R spoilers predict?

It looks like the jig could be up for Chloe soon. In Monday’s Y&R episode, Chelsea (Melissa Claire Egan) will tell Adam (Justin Hartley) that Chloe is back in Genoa City. A light bulb will apparently go off. Adam will encourage Chelsea to use their friendship to her advantage. She could get answers about Chloe’s ties to Victor.

Will Chelsea be able to get a confession from Chloe? Time will tell, but you can bet that Chelsea will try to learn whatever she can. Stick with the CBS soap to see the intense drama ahead.