The Young and the Restless (Y&R) Spoilers: Christian Revealed as Sully – Sage Heartbroken When Son Cries for Sharon 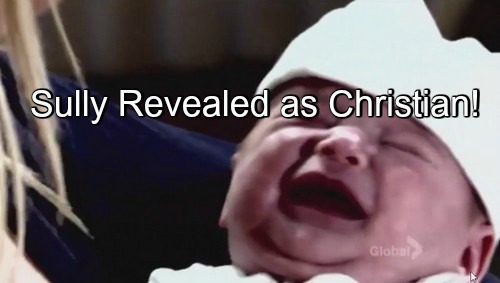 “The Young and the Restless” (Y&R) spoilers tease that the truth about Sully will soon be revealed. Sage (Kelly Sullivan), Nick (Joshua Morrow), Sharon (Sharon Case) and Dylan (Steve Burton) will all be affected in a big way. Adam (Justin Hartley) and Chelsea (Melissa Claire Egan) will also get involved once the paternity revelation comes along.

We know this is going to shake things up, but Y&R spoilers ask what will happen once the dust settles? Let’s take a moment to look at the situation we’re really dealing with. Sharon and Dylan have been caring for Sully for months. They’ve been great parents and Sully is a happy, healthy baby.

How will this child fare when he’s ripped away from his mother?

Babies are quick to bond with their moms and Sharon is the only one Sully’s ever known. Once Sully becomes Christian again, will he be able to find that connection with Sage?

Sully seems fine when Sage is holding him for a few minutes here and there. However, that may not be the case when Sage officially takes over.

The Young and the Restless spoilers say Sage will be heartbroken if Christian cries incessantly or develops health issues because he misses his fake mom and dad. There’s no doubt that Sage loves her child and she would obviously want what’s best for him.

Could Sharon and Dylan get their baby boy back? It wouldn’t be entirely out of the question.

We can’t forget that Victoria (Amelia Heinle) is raising Chelsea’s son, Johnny. “The Young and the Restless” sometimes favors a bond over blood. So where would that leave Sage and Nick? Shawn’s (Devon Martinez) storyline appears to be over, but maybe we shouldn’t be so quick to dismiss it.

It was dropped rather abruptly and it almost feels unfinished.

Shawn was uncertain of whether or not she was ready to be a mother. Could she show back up with David and sob about how she just can’t do this? Shawn didn’t have her family’s support. She’s likely on her own with David now.

It’s possible Nick and Sage could raise David if Shawn changes her mind. On the other hand, Christian may end up back with Sage and Nick after all. In that case, Dylan and Sharon might take David.

It would be tough to get over losing Sully so quickly, but would they truly pass up the chance to have a family again?

Of course, we have to get through the reveal itself first. Actually, it’s a double reveal since Nick will learn Adam is Christian’s biological father at some point. Adam will undoubtedly want at least a little contact with his kid.

There’s also some Y&R spoilers out there about the idea that Sage may not be in Genoa City indefinitely. It could throw everyone for a loop if she’s killed off or leaves town with her baby.

Bottom line, this is going to be a huge mess. It’s anyone’s guess how this storyline will turn out. One thing’s for sure: major news is about to hit Genoa City. Y&R viewers won’t want to miss what’s in store. Stick with the CBS soap for updates on the drama ahead.