BY Sean O'Brien on May 24, 2016 | Comments: 6 comments
Related : Soap Opera, Spoiler, Television, The Young and the Restless 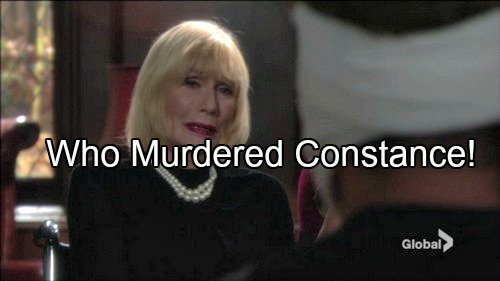 “The Young and the Restless (Y&R)” spoilers tease the number one soap opera will end May sweeps with a bang on this week’s episodes. Constance Bingham (Sally Kellerman) was poisoned, and all the so-called evidence points in Adam Newman’s (Justin Hartley) direction. He claims that someone set him up, and he’s sure that person is none other than The Moustache himself.

It’s pretty unlikely that Victor Newman (Eric Braeden) was the one who framed Adam–it’s much too easy to point the finger at him at this point. The Young and the Restless spoilers know everyone suspected Victor from the start, and it seems highly unlikely that Head Scribe, Chuck Pratt would go with such a predictable storyline.

Y&R spoilers indicate that it has to be someone else, someone much more personal and someone who was very close to the late, Constance Bingham.

“The Young and the Restless” needs to address three things about Constance’s death—-who poisoned her, planted and penned the faked the diary, and who had the most to gain from her death. Let’s examine these points a little further.

Dylan McAvoy (Steve Burton) believes that Constance was poisoned over an extended period. If you remember in 2014, when Adam appeared back on the show, he wasn’t able to walk or move around. Now we are supposed to believe that Adam, hobbled to the kitchen, poisoned Constance. That’s a pretty big stretch even for someone as disciplined as Adam.

The likely person would have to be a caretaker or her grandson, Gabriel Bingham (Justin Hartley). Sage had access to Constance, and often brought her tea to drink; however, it’s hard to imagine Sage Warner (Kelly Sullivan) killing anyone, let alone an elderly lady she claimed she loved and adored.

Sage touted many times that no one knew her like Gabriel. If he knew her as well as she claimed, he would have known that she carried and religiously wrote in a diary. Gabriel would know where to find it, and may even be able to create a replica journal with the purpose of framing Adam.

Now, if he would go to those extremes, it suggests that Gabriel Bingham either is alive and living in parts unknown [possibly as the new character Travis (Michael Roark)], or he targeted Adam before he pulled him from the car, and planned on using him to set him up for Constance’s murder. Either way, sweet Sage was likely his accomplice and knew about the grand plan all along.

The hardest part of the diary scheme was swapping the real diary for the fake one. At this point, it is unclear how the diary found its way to Sage and Nick’s (Joshua Morrow) apartment, but the word on the Internet is that Shawn (Devon Martinez) was the one who switched the diaries.

Apparently, she was hired by an unknown man who paid her to pretend to be a teen mom who wanted to give up her baby for adoption. Her only job was to swap the real diary for the doctored one.

And, the person who had the most to gain from her murder is a toss up. Sage and Gabriel stood to get a large inheritance from her. Adam’s was focus during his time at Constance’s house was getting strong enough to win Chelsea (Melissa Claire Egan) back and get to see his son Connor (Gunner and Ryder Gadbois) again. Adam wasn’t worried about money, power, or a murder plot.

Is it possible that Gabriel Bingham set the wheels in motion to frame Adam? Did Sage have anything to do with the scheme to frame him? Don’t forget to come back later to CDL later for more juicy “The Young and the Restless” spoilers, news, and updates.