BY Cristie Geroux on September 29, 2016 | Comments: one comment
Related : Soap Opera, Spoiler, Television, The Young and the Restless 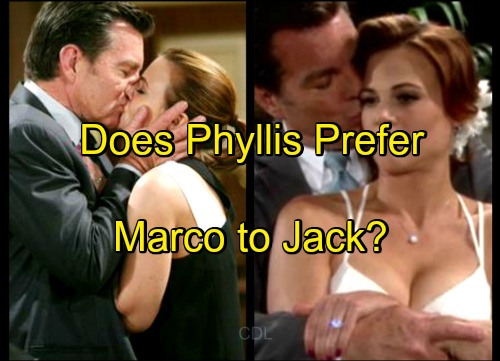 The Young and the Restless (Y&R) spoilers reveal that as Phyllis continues to struggle with her feelings, and her guilt may not just be about her affair.  Long-time lovebirds and super couple, Jack Abbott (Peter Bergman) and Phyllis Summers Abbott (Gina Tognoni) have hit a snag in their marriage and it looks like it is coming to an end after her affair with his younger brother, Billy (Jason Thompson).

Once the Young and the Restless’ scandalous affair was revealed, Jack and Phyllis have argued resulting in Phyllis falling down the stairs and ending up in the hospital.  Initially she was unconscious and it was unclear whether Jack had pushed her down the stairs or if it was an accident. Thankfully and shockingly when she awoke, she cleared Jack’s name.

Jack and Phyllis have a long history together.  They married for the first time in 2001, which ironically ended in divorce, when she had an affair with Nicholas Newman (Joshua Morrow); resulting in her pregnancy with Summer (now Hunter King).

They struggled, but always returned to one another in spite of Victor Newman’s (Eric Braeden) manipulations, although his last scheme may have been the one that finally ended them for good.

The Young and the Restless showed Phyllis and Jack escaping to a tropical island, getting married and celebrating their honeymoon.  What Phyllis didn’t know at the time is Victor took Jack and replaced him with his doppelganger, named Marco Annicelli (also portrayed by Bergman).  Phyllis spent months with Marco, months that she thoroughly enjoyed.  Marco treated her like a queen and focused all his attention on her.

Even though Y&R’s Phyllis noticed the little differences, not once did she complain, she seemed to enjoy the change in “Jack”.  He was buying fast, expensive cars, he preferred to be anywhere over going to the office.  Marco was spontaneous and kept Phyllis on her toes.  It wasn’t until months later that the truth came out and she was reunited with her ever-loving husband, Jack.  This is where the controversy lies.

Y&R’s Phyllis has been withdrawn from her doting husband ever since she learned the truth.  It is clear that she truly loves Jack, but her newest affair seems to show she prefers the bad-boy type like Billy, over the gentle, loving, doting type like Jack.

Maybe the reason Phyllis keeps rejecting Jack and pushing him off, is not out of guilt from the affair, or because Jack looks identical to Marco; maybe she is struggling with the fact that she prefers the dangerous, bad-boy man who introduced her to intense and passionate sexual encounters?

Everyone is getting their mustache on! #YR pic.twitter.com/wLZVf04tGA

Jack is ready for a D-I-V-O-R-C-E. Phyllis, not so much. @ginatognoni #YR pic.twitter.com/VvlvQlIGmV