The Young and the Restless Spoilers: Dr Anderson Convinces Nick to Commit Sage to Fairview – Sully Obsession or Secret Scheme? 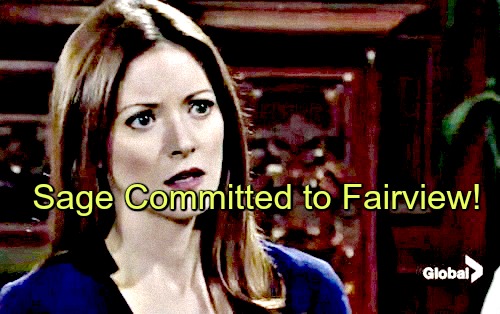 “The Young and The Restless” (Y&R) spoilers tease that Sage Newman (Kelly Sullivan) may soon find herself under the control of ruthless Dr Anderson (Elizabeth Bogush) at Genoa City’s nut house. And it’s all thanks to her darling hubby Nick Newman (Joshua Morrow).

Dr A has convinced Sharon Newman (Sharon Case) that Sage is obsessed with baby Sully. When Sharon confronts Sage and kicks her out of her house, Sage flies into a rage. This worsens when she finds Nick chilling at the GCAC with Sandy Anderson.

Moments before her arrival, Dr A mentioned that Sage is spinning out and may need a mental time out. When Sage confronts Nick for being with Dr Anderson and slaps him, it all blows up and it looks like Nick will finally believe Dr Anderson that Sage needs help desperately.

Nick will agree to commit Sage to Fairview and put her under Dr A’s care. But is this all part of a Snick plan to expose the devilish doc? Or does Nick legitimately think Sage is off her rocker? The confrontation between Sharon and Sage was real, but is the one at GCAC for Dr A’s benefit? Was that a staged slap?

We saw Nick and Sage conspiring on how to figure out what Dr Anderson is up to and they know her maiden name is important but Sage couldn’t get enough info out of the nurses at the GC hospital. Is her plan to go “undercover” at the mental hospital to look around?

If Nick is fake-committing Sage as part of a ruse, it’s a crazy plan – he’ll have no control over what Dr A does to his wife once she has her alone with her medical minions. Dr Anderson had Sharon so doped up she was able to convince her she was pregnant and had a baby.

What lengths would Dr A go to with Sage – the wife of the man she’s clearly obsessed with? What may be a clever plan by Nick and Sage could turn into a real mental health crisis for Sage if Dr A pushes her over the edge with medication and psychological tampering.

What do you think Y&R fans? Has Dr A finally convinced Nick that Sage is off her rocker – or are Sage and Nick playing dangerous games with the devious doc that may backfire and put Sage at risk? Share your comments below and come back to CDL often for more hot “The Young and The Restless” spoilers.