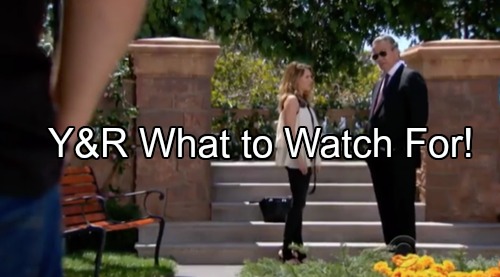 The Young and the Restless (Y&R) spoilers for the week of August 8-12 tease that Summer (Hunter King) will get caught up in her wedding preparations. Summer feels like Luca (Miles Gaston Villanueva) is her Prince Charming, but her family doesn’t agree. Nick (Joshua Morrow), Phyllis (Gina Tognoni) and Victor (Eric Braeden) are all working on getting rid of the pest who wants to be Summer’s husband.

Of course, The Moustache is the one Summer should be the most concerned about. He’ll vow to bring Luca down and we all know Victor follows through on his plans. Unfortunately, Summer will probably never see it coming.

The Young and the Restless spoilers indicate that Victor will pretend to be understanding and helpful. He’ll meet with Summer and mention that she’s always supported him. In return, Victor will promise to support Summer. She’ll think her grandfather intends on welcoming Luca to the family, but that’s obviously not what he has in mind.

Victor’s version of being supportive involves sending the sleazy Santori as far away from Summer as possible. He won’t rest until he gets Luca out of her life. Y&R spoilers say Phyllis may be willing to work with Victor if it means crushing Luca. She definitely won’t be on board with Luca and Summer’s nuptials.

In fact, Phyllis will suggest that she’d rather die that watch Summer go through with the ceremony. She’ll tell Jack (Peter Bergman) that this wedding is not happening. Will Summer and Luca tie the knot or will their dreams shatter instead? Stick with The Young and the Restless for updates on their future.

Meanwhile, Dylan (Steve Burton) will get a big break in Adam’s (Justin Hartley) case. He’ll open up to Sharon (Sharon Case) about what he’s learned. Dylan will announce that he can prove Chloe (Elizabeth Hendrickson) has been helping Victor frame Adam.

Let’s hope Dylan can keep his clue under wraps. Chloe could easily cover her tracks if she finds out what Dylan is up to. She didn’t come this far to fail. Chloe will do anything she can to avoid getting caught.

Y&R’s weekly promo shows Chloe telling Chelsea (Melissa Claire Egan) that she thinks she made a huge mistake. Chelsea will wonder what kind of mistake Chloe is talking about. The clip is likely a bit misleading. Chloe might mean moving in with Chelsea, pushing Kevin (Greg Rikaart) away or something along those lines. We can’t see Chloe divulging anything incriminating.

Later, Chloe will arrive at Newman Enterprises and state that it’s confession time. Maybe Chloe will admit that she didn’t burn the journal entries after all. That wouldn’t be shocking news to Victor. He realizes Chloe must have kept them. Chloe might be willing to make some sort of deal.

If the walls start closing in, Chloe won’t want to risk her own freedom. She has to be around to take care of Bella (Cali May Kinder). It sounds like Chloe will find herself in some tight spots this week. Stay tuned and don’t forget to check CDL often for the latest Young and the Restless spoilers, updates and news.