BY Sean O'Brien on November 6, 2016 | Comments: one comment
Related : Soap Opera, Spoiler, Television, The Young and the Restless 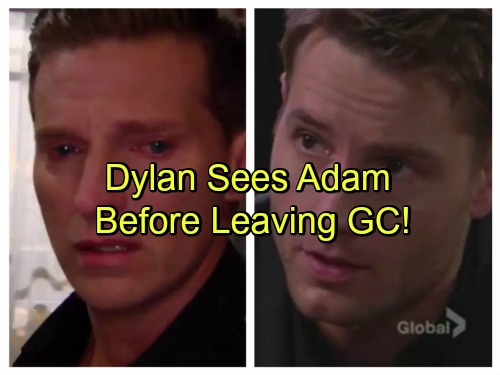 The Young and the Restless spoilers tease that Dylan (Steve Burton) will see Adam Newman (Justin Hartley) before Burton’s final scenes are shown early next year. Hartley has been seen frequently within the last few weeks, as various characters have reflected on the time they spent with Adam before he is believed to have died.

The Young and the Restless spoilers say Dylan won’t find Adam alive somewhere in Genoa City. Instead, he’ll appear in a dream Dylan has cryptically speaking about Christian. That will establish the second part of this complicated reveal.

Currently tortured over the loss of another child, The Young and the Restless spoilers predict that Dylan will spend the next few months working through the impossible situation that Sharon (Sharon Case) enabled. Dr. Sandra Anderson’s (Elizabeth Bogush) kidnapping scheme and subsequent faux delivery of Sully through Sharon’s womb represented two terrible events.

But Sharon didn’t tell her husband that she realized and then confirmed what had happened until Halloween 2016. Sharon’s acknowledgment of her miscarriage and admission that Sully was actually Sage (Kelly Sullivan) and Nick’s (Joshua Morrow) child caused Dylan to realized he was betrayed, which is why Shylan is almost certainly finished.

As Y&R viewers recall, Sullivan’s character began appearing to Sharon shortly after Sage was killed. Those scenes were likely filmed before Sullivan exited her role. Bogush appeared in a fresh scene last week, as Patty’s (Stacy Haiduk) mind drew Dr. Malpractice back from the gave.

Sandy taunted her patient, then turned to reveal the effect of a crimson stab wound which spotted her white lab coat.

Just Hartley is currently working through Season 1 of NBC’s prime time show This Is Us. So, unlike Bogush, he probably didn’t film his upcoming scenes in recent weeks. Like Sullivan, he probably worked ahead on the follow-through to this storyline.

The double mystery Y&R’s last head writer (Chuck Pratt, Jr.) created was rather entangled: Sage and Nick, along with Adam and Chelsea (Melissa Claire Egan) were temporarily broken up in the winter of 2015.

The Young and the Restless fans recall that Sage and Adam acted impulsively, during what was portrayed as a revenge romantic encounter. That act is believed to have led to Sage becoming pregnant with Adam’s child.

Sage eventually learned that the baby she was carrying wasn’t Nick’s, but didn’t tell him that fact before she died. Adam shared what he believed was his paternity truth with Chelsea after Sage died, but Chadam agreed to withhold this information from Nick.

Recent The Young and the Restless spoilers suggest that in fact Christian really Nick’s son – that Victor (Eric Braeden) tampered with the DNA paternity test in order to make Adam think he was the biological dad, thereby gaining leverage over his wayward son.

Their intentions were compassionate because Sage was killed in a tragic accident. Meanwhile, Sharon transformed herself from victim to villain because she was unable to tell the truth. All plot lines are now affecting Dylan’s mind, which is set to be visited by Adam’s ghost.