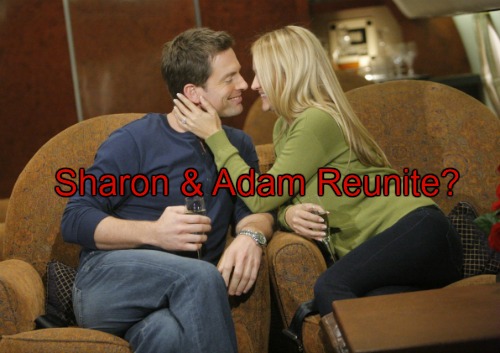 The Young and the Restless spoilers tease that Shadam will be revived in the Y&R future. Dylan (Steve Burton) and Chelsea (Melissa Claire Egan) are two barriers that stood in the way of a reunion between Sharon (Sharon Case) and Adam Newman (most recently played by Justin Hartley) until recently.

But, the Sully reveal as Christian and Burton’s voluntary departure from the show have knocked down one rook in this relationship chess game. Chelsea is the next piece to fall and Adam will push her over.

Sally Sussman in a recent interview went on about how Justin Hartley was gone from The Young and the Restless forever and that she had no intention of bringing Adam back anytime soon. Well CDL thinks that the new Y&R head writer will change her mind and Adam Newman will return to the Genoa City Canvas within a year.

Not only is Adam the most popular Y&R character but there are a host of important storylines, such as Christian’s paternity, Phyllis’s kidnapping of The Moustache’s son, and Chloe’s attempted murder, dependant on this polarizing character’s presence in GC. These and other storylines will remain hanging and unfinished until Adam returns – soap fans do not like when TPTB decide that they can abandon important arcs for their convenience. Yes, bringing back Adam without Justin Hartley won’t be easy – but it must be done.

For now however, Adam Newman is dead and Chelsea still loves him. So, how will Shadam be revisited even if this electric character returns? Well, nothing is impossible in the soap world as viewers know. Plus, Case recently said in a Facebook Live chat she participated in with Camryn Grimes (Mariah) that she believes Sharon will be with Adam in the future.

Speculation fuels daytime drama. But it’s noteworthy when an actor on Y&R voluntarily suggests that a character who is believed to be dead has storylines in his future. Conjecture on Case’s part? Maybe. So, let’s explore how her prediction plays out.

Y&R intentionally left Adam’s death open. Yes, the Genoa City Police Department found DNA evidence that was linked to him at the cabin scene. However, Chloe (Elizabeth Hendrickson) and the viewers know that she shot Adam with a dart gun. That alone would have splattered some Victor, Junior juice on the walls. Therefore, whatever pieces of his body were recovered actually confirms nothing in this specific soapy instance.

Okay, Adam is alive. But if that’s true he definitely would have contacted Chelsea, or someone, by now. Wrong. The man was shot and then somehow survived an explosion. That means he either escaped on his own before the blast, survived it and crawled to safety, or was rescued by someone at some point before or after the place went boom.

However, any scenario doesn’t preclude Adam from later falling into unconsciousness, after which someone began taking care of him; or, he could have been rescued and has been held captive by a deranged lunatic. Yes, those individuals have been known to pop up on soaps when needed.

One needs to assume that Adam is alive, which is hardly a stretch considering that he’s only used a few of his nine lives to-date. That fictional reality keeps this character in the play. Next is Chelsea.

Chelsea is growing closer to Nick by the day. But she’ll still be instantly drawn back to Adam when he reappears. However, Adam will feel betrayed and reject Chelsea because of her connection to his brother. This point will put Sharon back in the picture.

Sharon will still be reeling from her loss of Sully, Dylan’s departure and their subsequent divorce. She’ll be available and her heart will open to Adam. Thus the path to Shadam’s reunion can be seen. Yes, some fans may argue against this former super couple’s revival. But no one can honestly claim that Adam can’t brought back (as embodied by Michael Muhney or another actor), and then that a Shadam reunion is impossible.

CDL is a leading source for everything linked to The Young and the Restless. Check back regularly for Y&R spoilers and news! Please come on over and participate in the LIVE Y&R discussion on our Facebook Page!