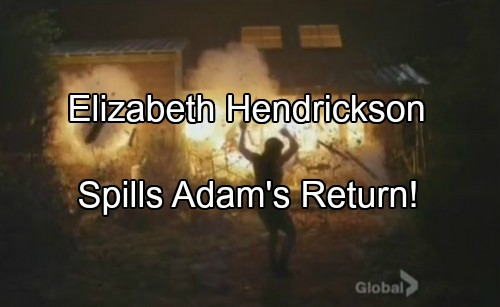 The Young and the Restless (Y&R) spoilers tease that the mystery surrounding Adam Newman’s (Justin Hartley) “death” will continue. The CBS soap threw quite a bit of information at us around the time of Adam’s exit. They just didn’t give us clear-cut answers.

Of course, that was an intentional move. For starters, they probably wanted to keep their options open. The details of Adam’s departure led to some crucial questions. There’s been a lot of talk floating around about Adam being gone for good, but we’re not buying it.

Adam is a crucial character and he’s poised to take over for Victor (Eric Braeden) one day. Nick (Joshua Morrow) doesn’t have the same ruthless side that Adam Newman has. Adam is a decent guy at heart, but he’s not afraid to push the envelope. Once Victor has passed on, we’ll need a fearless leader for the Newman clan.

Plus, the fact that we never saw Adam’s body was telling. The cops found tissue that matched Adam’s DNA, but so what? It could’ve been planted or Adam could’ve been wounded before escaping. Whatever the case, we never saw a corpse. That’s usually a sure sign that a Young and the Restless character will return.

Let’s mull over the events leading up to the explosion, too. Chloe (Elizabeth Hendrickson) shot Adam with a tranquilizer dart and insisted that she wanted to watch him die. What happened after that? It’s possible that Chloe heard someone coming and decided to make a break for it.

We saw a flashback of Chloe watching the flames of the explosion, but that’s certainly not enough evidence to say she sparked the whole thing. Elizabeth Hendrickson doesn’t think Chloe is responsible either. In an interview with Michael Fairman, Hendrickson shared her thoughts on Adam’s fate.

“In my mind her intention was just to have him suffer and I think her use of a tranquilizer was her hoping Adam would have a slow death,” Hendrickson said. She quickly added, “But I don’t think her plan was to have him blown up! She had nothing to do with the explosion.”

Hendrickson was also asked if Chloe knew Adam’s whereabouts and she gave an interesting response. “No, I don’t think she really knows, nor do I think she really cares,” Hendrickson said. She suggested that Chloe is satisfied now that Adam is out of the picture.

Although Hendrickson may not know exactly what’s in store on Y&R, these seem like hints that Adam is still alive. The explosion was a perfect cover for a faked death. Someone could’ve grabbed a tranquilized Adam and rigged the blast to conceal the scheme.

The Young and the Restless showed us a pair of black gloves placing Adam’s wedding ring in a drawer. Were those Adam’s hands or the hands of the person who’s hiding him? It’s tough to say, but the scene was obviously significant or they wouldn’t have included it.

Who stashed Adam away and how long will they keep him there? It sounds like a wild ride is in the works. We’ll give you updates as more news comes in. Stay tuned to Y&R and don’t forget to check CDL often for the latest Young and the Restless spoilers, updates and news.