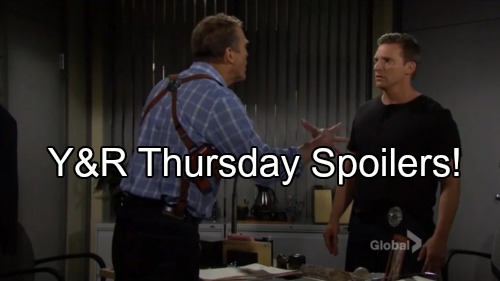 The Young and the Restless (Y&R) spoilers for Thursday, August 11, tease that things will get tense at Connor’s (Gunner and Ryder Gadbois) birthday party. When Victor (Eric Braeden) shows up with Nikki (Melody Thomas Scott), Chelsea (Melissa Claire Egan) won’t be pleased. She’ll definitely want to give Victor a piece of her mind.

After Nikki and Victor meet Bella (Cali May Kinder), Chloe (Elizabeth Hendrickson) will take her upstairs with Connor. Chelsea will unleash her wrath on Victor for coming to her home. Nikki will pipe up that Victor didn’t frame Adam (Justin Hartley). Victor will also stand by his innocence and claim he’s Adam’s only hope. Chloe will eavesdrop as the confrontation heats up.

Later, Chloe will urge Chelsea to take Connor for a visit at Walworth. She’ll state that Adam might get upset, but he needs to see his son. Meanwhile, Adam will write a letter to Connor for his birthday. Dylan (Steve Burton) will arrive with updates on his suspicions regarding Chloe.

Adam will be glad that Dylan is backing him up. However, Dylan will suggest that they could have a tough time proving Victor and Chloe are in cahoots. Adam will crumple the letter he was writing as he grows increasingly frustrated.

Michael (Christian LeBlanc) will drop by to show his support and indicate that some fierce people are out there fighting for Adam. Unfortunately, Kevin (Greg Rikaart) isn’t one of them. Michael will mention that Kevin won’t be of much use since he still loves Chloe. Adam will think Kevin needs to see Chloe’s true colors.

The Young and the Restless spoilers say Chelsea will show up with Connor a little later. Adam will be stunned to see them. He’ll take Connor in his arms and wish him a happy birthday. It looks like Chelsea’s gesture will backfire. In Friday’s Y&R episode, Adam will tell Chelsea to never put Connor in that position again.

At the police station, Kevin will remain in Chloe’s corner as Dylan quizzes him. Paul (Doug Davidson) will overhear and erupt over Dylan’s continued investigation. He’ll snap that the rules must be followed. Dylan will be forced to hand over his weapon and his badge.

Paul will give Nikki the suspension news and she’ll realize it was because of Adam’s case. Nikki will reiterate that Victor is innocent. At the park, Victor will lash out at Chloe over the missing journal entries. He’ll order Chloe to produce them and leave town immediately.

Dylan will seem intrigued by Victor and Chloe’s meeting as he gazes from afar. On Friday, Dylan will announce that he thinks he’s found a way to clear Adam. Stick with The Young and the Restless to see what Dylan comes up with.

In the meantime, Mariah (Camryn Grimes) will have a confession to make. At home, Sharon (Sharon Case) will notice the flowers Mariah brought in. Mariah will admit that she intercepted the gift Kevin intended for Chloe. Sharon will press Mariah to open up about why.

Mariah will state that Kevin deserves happiness and she doesn’t think Chloe will lead to that. Sharon will wonder if Mariah is afraid they’ll reunite and leave her out of the picture for good. Mariah will hint that she wants something that just isn’t going to happen.

Kevin will call Mariah to fill her in on Chloe’s lack of contact. He’ll be bummed that Chloe didn’t mention getting the flowers. Mariah will advise Kevin to back off and wait for Chloe to make a move.

After hanging up, Mariah will contemplate returning the flowers and letting Kevin try his luck with Chloe. Sharon will suggest that Chloe won’t know the difference and they’ll share a chuckle. It appears Mariah will keep quiet for now.

Will Mariah prevent the reunion Kevin is dreaming of? Does Mariah still have a shot with Kevin? We’ll have to wait and see, but some twists and turns are certainly in the works. Stay tuned to Y&R and don’t forget to check CDL often for the latest Young and the Restless spoilers, updates and news.