‘The Young and the Restless’ Spoilers: Hilary Stuns Jack with a Kiss – Phyllis Declares Love for Billy, Plans Future Together 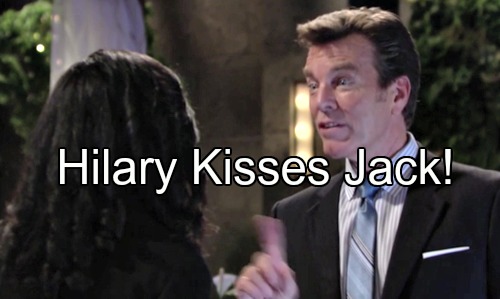 The Young and the Restless (Y&R) spoilers tease that Hilary (Mishael Morgan) will continue her efforts to grow closer to Jack (Peter Bergman). Hilary has given us some subtle clues that confirmed this was part of a mischievous plan. However, there’s a chance Hilary is developing legitimate feelings for Jack.

That’s usually the way soap schemes go. Whenever a character tries to woo someone with a particular goal in mind, he or she usually ends up falling for that person in the process. We could easily see Hilary decide that she genuinely longs for a romance with Jack.

Lily (Christel Khalil) suggested that Hilary just wanted a backup in case Devon (Bryton James) left her. Instead, Hilary is taking matters into her own hands by leaving Devon. Of course, Devon is trying to stop Hilary from divorcing him.

He intends on turning the tables, but that plot may not pan out.

Devon tends to be powerless when it comes to Hilary. All she has to do is bat her eyes and Devon falls under her spell. He’s become a bit of a weakling thanks to Hilary’s control. No one would be surprised if Devon truly joined Hilary’s evil team.

They could take everyone else down together.

In the meantime, Hilary is trying to win Jack over. She’s been giving plenty of signals lately. Jack is starting to pick up on the sexual tension. The Young and the Restless spoilers indicate that Hilary will soon make her boldest move yet.

Hilary will express her gratitude for Jack’s support during her relapse. Then, she’ll show Jack just how much he means to her. Hilary will plant a doozy of a kiss on Jack and they’ll be left to sort out their feelings.

How will Jack react to this smooch? Will he pipe up that he’s a married man? Jack may make it clear that he doesn’t feel right about betraying his wife.

Elsewhere, Phyllis (Gina Tognoni) will make a major confession to Billy (Jason Thompson). She’ll declare that she loves him. Y&R spoilers say Billy will be thrilled by the news. Billy will hope this means Phyllis is ready for a life with him.

Unfortunately, Phyllis won’t be prepared to take that leap. She’ll need time to process what that would mean for them as well as Jack. Phyllis might consider the idea of sitting Jack down and coming clean about her affair. She could make the decision to end her marriage and move forward with Billy.

Wouldn’t it be interesting if Jack beat Phyllis to the punch and admitted he shared a kiss with Hilary? Jack could be extremely apologetic and assure Phyllis that it won’t happen again. He might insist that he wasn’t the one who initiated it and promise that he would always remain faithful.

Phyllis’ guilt would really start to pile up! She might back out of telling Jack the truth. Nevertheless, Jack is going to find out sooner or later. The Young and the Restless viewers are hoping for a soapy reveal filled with fireworks.

Once Jack realizes Phyllis has been sneaking around with his brother, his first stop may be Hilary’s bedroom.

Revenge sex could be brewing! We’ll give you updates as Y&R brings us love (and lust) in the afternoon. Stay tuned and don’t forget to check CDL often for the latest Young and the Restless spoilers, updates and news.