The Young and the Restless (Y&R) Spoilers: Ian Makes Deal with Adam, Gets Confession from Victor – Meredith Gone 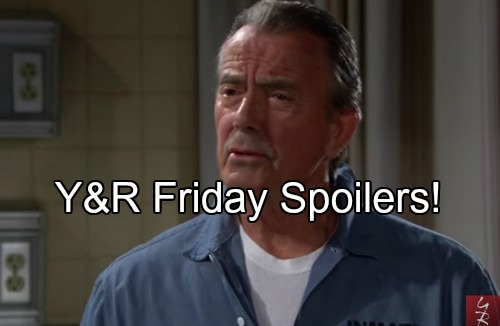 “The Young and the Restless” spoilers for Friday, June 3, tease that Michael (Christian LeBlanc) will urge Paul (Doug Davidson) to give Adam’s (Justin Hartley) case a closer look. He’ll maintain that Adam is being framed by Victor (Eric Braeden). Michael will hint that Victor could’ve bribed someone to alter the report on Constance (Sally Kellerman). Paul will concede that it’s worth checking out.

At the penthouse, Y&R spoilers say Sharon (Sharon Case) will drop by to get some work done with Chelsea (Melissa Claire Egan). Adam will chat with Sharon about the accusations he’s facing. He’ll assure Sharon that he didn’t kill Constance. Adam won’t like the idea of being taken away from his son when he’s innocent.

Sharon will look nervous when Adam brings up what he did to her years ago. He’ll suggest that he’s sorry about stealing Faith (Alyvia Alyn Lind). It was awful to make Sharon think her baby was dead. Sharon will blurt out that she’s sure Adam had his reasons.

Once Adam leaves, Chelsea will ask Sharon to speak with Nick (Joshua Morrow). She’ll believe Sharon can convince Nick to help Adam. Sharon will get agitated and insist that she can’t do it. She’ll rush out of the penthouse and head home.

Meanwhile, Nick and Dylan (Steve Burton) will discuss Adam’s case. Dylan will urge Nick to think about how this could affect Connor (Gunner and Ryder Gadbois). Nick will admit that he’d be pretty terrible if he let a father be taken away from his son.

Sharon will arrive just in time to catch part of Nick’s statement. She’ll fear that Nick knows the truth about Sully, but she’ll soon realize Adam is the topic of conversation. Sharon will share that Adam and Chelsea were pressuring her to win Nick over. A furious Nick will leave to confront them. Sharon will tell Dylan that Nick is “getting too close.”

Dylan will vow to protect Sharon from the Newman web.

Other “Young and the Restless” spoilers reveal that Victor will show up at the prison infirmary, but Meredith (Alicia Coppola) won’t be around. Victor will ask the male doctor what happened to Dr. Gates. He’ll find out that Meredith took a leave of absence. When the new doc steps away, Victor will call Meredith and plead for her return.

In the visiting area, Ian (Ray Wise) will wait for his visitor. He’ll hint that this showdown is long overdue. After Adam arrives, Ian will make a comment about being left for dead in the fire. Adam will want to put aside their differences and make a deal. He’ll ask Ian to get a confession from Victor. Adam needs Victor to admit that he’s the one who framed him.

Ian will be on board with the idea, but he’ll have some demands. Getting out of solitary confinement is a nice start, but he’ll want more later. They’ll make their agreement and Adam will return home to give Chelsea updates. She’ll be horrified by the news, but Adam will believe this plan could work.

Y&R spoilers say Nick will drop by to unleash his wrath. He won’t appreciate that Adam and Chelsea tried to drag Sharon into the mess. Nick will shout that Adam and Victor can destroy each other for all he cares. Adam will point out that Victor will be coming for the rest of the wayward Newmans eventually.

He’ll suggest that Nick shouldn’t come around begging for his help when Victor puts a target on his back.
Back in prison, Victor will be on cleaning duty when he runs into Ian. They’ll banter a bit and talk will turn to Victor’s revenge. Ian will hint that Victor can’t do much behind bars. Victor will mention that Adam could be the next Newman to end up in the state pen.

Ian will think that must bring Victor a real sense of satisfaction, especially if he’s the reason for Adam’s misfortune.

Victor will simply hand Ian his bottle of cleaner and let him know he should do a good job. Ian will observe Victor as he walks away. Will Ian be able to fulfill Adam’s wishes? It’s tough to say, but Ian will give it his best shot. If anyone can get a confession out of Victor, it’s Ian. Stick with the CBS soap to see if Adam will regret aligning with an enemy.