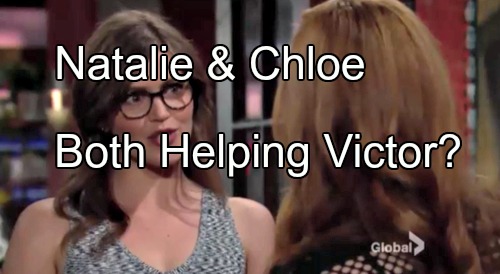 The Young and the Restless (Y&R) spoilers tease that Natalie (Mara McCaffray) could be hiding a big secret. After checking out the the computer system at Newman Enterprises, Kevin (Greg Rikaart) discovered that Natalie had been doing some meddling.

He assumed Natalie had been working with Victor (Eric Braeden) and immediately confronted her about it.

Of course, we know that Victor has a plan in motion to bring down Adam (Justin Hartley). He has a female accomplice, but we’re still betting that’s Chloe (Elizabeth Hendrickson). Victor pointed out that his secret partner had a vendetta against Adam. Chloe blames Adam for Delia’s (Sophie Pollono) death, so it makes sense that she’d want to put him behind bars.

Natalie, on the other hand, doesn’t seem to have a motive for making Adam pay. If Natalie is indeed working for Victor, it’s likely part of a separate plot to damage Newman Enterprises and Victoria in particular.

Victor desperately wants revenge on Adam, but we can’t forget about Victoria (Amelia Heinle). Even Nick (Joshua Morrow) could be affected by the sabotage at Newman. He would hate to see this happen to his sister and his family’s company.

It’s possible that Natalie was bribed or blackmailed into helping Victor complete his mission for vengeance. However, we should also consider the possibility that Natalie is innocent of Kevin’s accusations. There’s a perfectly logical explanation that would link Natalie to the computer system and Newman’s recent oil crisis.

Remember when Billy (Jason Thompson) called Natalie over and asked her to dig up info on the leaking oil platform? Perhaps Kevin saw where Natalie had hacked into the system and simply assumed the worst. We couldn’t blame Kevin for thinking that Natalie was up to no good.

After all, Natalie was on the run with millions when she first arrived on The Young and the Restless. Mariah (Camryn Grimes) has certainly made it clear that Natalie can’t be trusted. Even so, it sounds like Natalie’s latest scheme may actually be a misunderstanding.

Kevin might be apologetic after he hears Natalie’s side of the story.

As for Mariah, she’ll continue to think Natalie is trouble. These two have never gotten along and they probably never will. They both have the hots for the Kev man and there’s only one of him to go around.

Y&R spoilers state that Natalie will confront Mariah about her attempt to eliminate the competition. She’ll think Mariah wants her rival out of the picture so she can have mediocre sex with Kevin again. Naturally, Mariah won’t appreciate Natalie’s low blow.

It’s true that there weren’t fireworks in the bedroom, but Mariah still feels a deep connection with Kevin.

Kevin may have even bigger problems to deal with in the near future. The Young and the Restless spoilers say Chloe will show up in Genoa City and this time she’ll have her daughter with her. We don’t know whether this toddler belongs to Billy or Kevin yet, but it would definitely be interesting if she’s a little Fisher.

That would be some huge news!

Kevin may have to figure out this whole parenting thing pretty soon. We’ll give you updates if any more details emerge. Stay tuned to Y&R and don’t forget to check CDL often for the latest Young and the Restless spoilers, updates and news.