The Young and the Restless (Y&R) Spoilers: Is Travis Really Gabriel Bingham – Back from the Dead for Revenge?

BY Sean O'Brien on May 24, 2016 | Comments: 5 comments
Related : Soap Opera, Spoiler, Television, The Young and the Restless 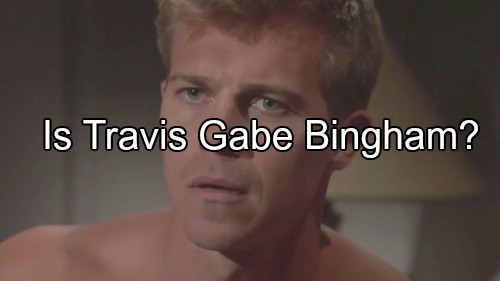 “The Young and the Restless” spoilers tease that Travis (Michael Roark) may have some dark secrets. It’s clear that there’s more to Travis than meets the eye. Whenever new Y&R characters appear, they often end up tied to a character currently on canvas or at least to a previous storyline. It’s a good way to integrate newbies into Genoa City.

With that in mind, we’re wondering what Travis’ backstory might be. He’s alluded to a few mistakes that he’s trying to put behind him. Victoria (Amelia Heinle) thinks she’s been getting to know Travis, but does she really know him at all?

Y&R spoilers suggest that Travis may have another identity that he’s swept under the rug. Could Travis actually be Gabriel Bingham (Justin Hartley) with a new face? “The Young and the Restless” viewers know that Gabriel died saving Adam’s (Justin Hartley) life. Adam stole Gabe’s identity as part of Sage’s (Kelly Sullivan) plan.

A little plastic surgery turned Adam into a dead ringer for Gabriel.

Sage and Adam tried to fool Constance (Sally Kellerman) into thinking Adam was her grandson. They thought they were going to pull it off, but a dying Constance saw Gabriel as she headed into the light. It tipped her off to the fact that the “Gabriel” in front of her was not the real Gabriel.

That seems to suggest Gabriel was truly dead, but what if Constance simply hallucinated the encounter? She was elderly and fading fast. Besides, soap writers change plot points as they see fit. Nothing is ever set in stone.

The Young and the Restless spoilers suggest that this could leave the door open for Gabriel to return for vengeance. Of course, Travis looks nothing like Gabriel now. Perhaps Travis also received plastic surgery in an effort to fully commit to his scheme. It’s the only way Travis could pull the wool over everyone’s eyes. He may have bought Hank’s bar to help his charade.

We should mention that Travis’ first air date was Sage’s last. The timing of that is a bit suspicious. Now Sage’s journal has been tampered with and Adam is being charged with Constance’s murder. It’s strange that all of this went down right after Travis came on the scene. While it may be a coincidence, it’s still odd.

Is Travis responsible for framing Adam? The whole idea is admittedly somewhat farfetched, but so was Jack (Peter Bergman) having a doppelganger in a Peruvian prison. Nothing is ever too unbelievable on a soap. Travis could even be connected to another character around town. Who knows?

Travis may or may not be Gabriel Bingham, but he obviously has something to hide. Luca (Miles Gaston Villanueva) will undoubtedly find some dirt on this guy before long. Maybe Luca will learn Travis’ secret and blackmail him into destroying Victoria. Regardless, Travis’ mystery is about to unravel.

Stick with “The Young and the Restless” for updates on the chaos to come.

So Y&R fans, what do you think about the news that Travis likely has a dark side? Could Travis be Gabriel Bingham with a new face? Is he back for revenge? If not, could Travis be tied to a different character on canvas?