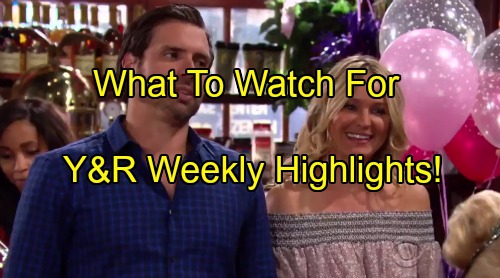 The Young and the Restless (Y&R) spoilers for the week of September 26-30 tease that we’ll see a nice mix of drama and fun in Genoa City. Things have been heavy lately thanks to the reveal of Phyllis (Gina Tognoni) and Billy’s (Jason Thompson) affair. Fortunately, Y&R plans to throw in some lighter moments as well. A good soap is all about balance.

First, let’s talk about the dramatic side. The Young and the Restless weekly promo shows Lily (Christel Khalil) looking worried as she tells Billy (Jason Thompson) and Cane (Daniel Goddard) to brace themselves. It appears they’re about to watch some footage in the Brash and Sassy office.

This might relate to the continued “Philly” backlash or it could have something to do with marketing. Either way, Lily doesn’t seem too happy. We’ll also see Ashley (Eileen Davidson) and Travis (Michael Roark) face a rocky elevator ride. Perhaps it will stall and they’ll have a chance to get better acquainted.

The Young and the Restless might be doing an onscreen chemistry test here. Travis is with Victoria (Amelia Heinle) now, but we all know it won’t last. The more Victoria tries to fight a reunion with Billy, the closer she’ll end up getting to him. Once they inevitably get back together, Travis may need a new love interest.

Remember when Chelsea (Melissa Claire Egan) comforted Nick (Joshua Morrow) in a sweet scene after Christian’s death? Many Y&R fans assumed the show was keeping their options open. They were probably seeing what the vibe was like and determining if “Chick” would be a good couple down the road.

Plus, it laid a little foundation for what we’re seeing on screen now. The Young and the Restless spoilers suggest that Sharon (Sharon Case) and Faith (Alyvia Alyn Lind) will do some matchmaking this week. They’ll think Chelsea and Nick would be perfect for each other. 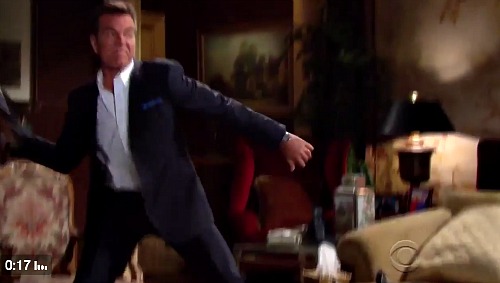 Geez, Sharon. Let the woman grieve! This is a huge dis to Adam’s (Justin Hartley) memory, but oh well. Soaps love to speed through the mourning process. Luckily, Chloe (Elizabeth Hendrickson) will let Chelsea know what Sharon and Faith are up to.

Chelsea will maintain that she’s just friends with Nick. Period! That probably won’t be the case forever, but at least Chelsea loves Adam enough to wait a while. That brings us to the fun stuff. Faith is having a birthday party! Sharon and Nick will make sure Faith has plenty of guests to celebrate her b-day.

Mariah (Camryn Grimes), Kevin (Greg Rikaart), Travis, Victoria and more will gather for the cute shindig. They’ll think a special girl deserves a special gathering, so expect cake and lots of silliness. That should help curb the sadness as Jack continues to go off the rails. 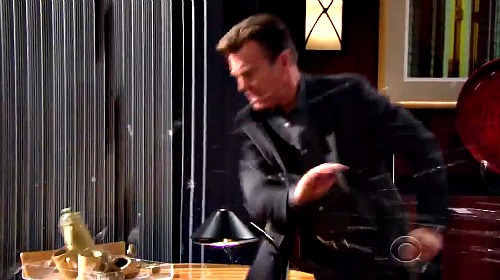 Jack will find it difficult to cope with the situation Phyllis has placed him in. He’ll have several emotional outbursts as he attempts to manage his anger. Jack is clearly on the verge of losing control. We’ll give you updates as other news comes in. Stay tuned and don’t forget to check CDL often for the latest The Young and the Restless spoilers, updates and news.