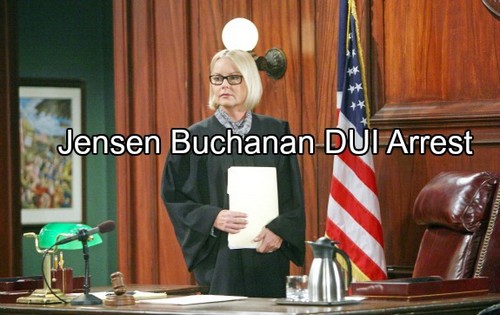 ‘The Young And The Restless’ spoilers report that star Jensen Buchanan was arrested for a DUI in the wee hours of the morning on Wednesday May 18. Buchanan began her recurring role as Elise Moxley on the CBS soap opera earlier this year, a former flame of Victor Newman’s (Eric Braeden) and a Genoa City judge. According to several news reports, Jensen Buchanan was involved in a car accident near Santa Barbara, California.

CBS Los Angeles news reports that Jensen Buchanan’s car crash occurred around 6:00 AM on Wednesday May 18. ‘The Young And The Restless’ actress allegedly swerved out of her lane and drove her 2016 Mercedes across the center of the road and collided with a Ford pick-up. The ‘Y&R’ star’s injuries were minor and she was treated at a local hospital.

The driver of the Ford pick-up that she struck’s injuries were much more severe and he is still reportedly in the hospital.

According to the CBS local news report, after Jensen Buchanan was treated at the hospital, local police arrested her for an alleged DUI (Driving Under The influence Of Alcohol or Drugs). So far no one from Jensen Buchanan’s camp has commented on the news report, nor her arrest. The ‘Y&R’ star has not spoken out about the incident or confirmed nor denied the car accident.

Already ‘Y&R’ stars speculating on social media that the CBS soap opera will drop Jensen Buchanan from the cast. Although, she wasn’t a major asset to the cast to begin with, especially now that Victor Newman (Eric Braeden) is incarcerated.

CDL will keep you updated on the ongoing story. Don’t forget to check back for all of your ‘The Young And The Restless’ spoilers and news.