The Young and the Restless (Y&R) Spoilers: Lab Tech Bribe Reveal – Victoria Shocked by Travis’ Past – Ian Takes a Beating 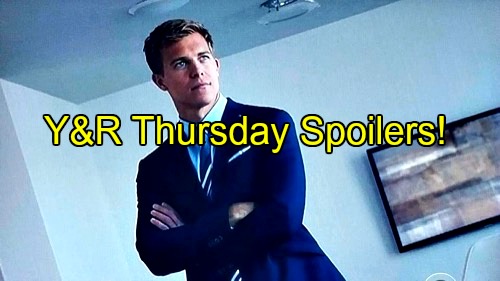 “The Young and the Restless” (Y&R) spoilers for Thursday’s episode, June 9, tease that Nick (Joshua Morrow) will have some concerns about the company Victoria (Amelia Heinle) has been keeping. He’ll bicker with Victoria at Hank’s bar until she asks to discuss this privately.

Victoria will assure Travis (Michael Roark) that she’ll sort this out and return for the rest of their slow dance later.

Once they’re alone, Nick will suggest that Travis may be working for Victor (Eric Braeden). He’ll feel like Victoria doesn’t really have the whole story on this guy. Y&R spoilers says that Nick will admit that he got his information from Luca.

Elsewhere, Phyllis (Gina Tognoni) will throw a few threats at Luca (Miles Gaston Villanueva). He won’t seem to care. Luca will insist that he can’t be scared off. Phyllis will remind Luca that she made sure Victor got what he had coming. The Young and the Restless spoilers warn that Luca could face a similar fate if he’s not careful.

Nick will meet up with Phyllis and they’ll talk about Summer’s (Hunter King) beau. They’ll agree that they need to make sure Summer is protected from Luca. Phyllis will suggest that they should play it cool and let Luca think they’re backing down.

They can accept Luca into the family and invite him to important functions. Luca might realize that he’ll have to deal with every last Newman if he wants to go for power. Phyllis will think it might be enough to make Luca bail.

Nick will like the sound of that and they’ll drink to the new plan.

In the prison infirmary, Victor and Meredith (Alicia Coppola) will put their clothes back on after another steamy session. Meredith will gripe about Victor being locked up when Adam (Justin Hartley) is the one who deserves to be there. Ian (Ray Wise) will waltz in and declare that he has something to say.

Meredith won’t listen and a guard will lead Ian out.

Later, Y&R spoilers reveal that Victor will encounter Ian once again. When Ian announces that he’s testifying against Victor, a showdown will ensue. Ian will gloat that he’s getting out of there, but Victor can stay behind and serve a longer sentence. He’ll just have more time to spend in the infirmary.

Punches will start flying. The Moustache will try to beat Ian to a pulp, but the warden will intervene.

Victor will complain that he’s the victim of a devious plot. He’ll state that Adam, Michael (Christian LeBlanc) and Ian have united against him. The warden won’t care about Victor’s excuses.

Vic will get the news that he’s headed to solitary confinement and his infirmary privileges have been revoked.

Ian will end up back in the infirmary with Meredith. He’ll mention the proof he has of Victor’s setup. Ian will suggest that Meredith already knows Victor is guilty deep down. Meanwhile, Dylan (Steve Burton) and Paul (Doug Davidson) will share a conversation with the lab tech’s girlfriend.

She’ll claim he talked about rich friends being even better than hitting the lotto jackpot.

At the penthouse, Adam and Chelsea (Melissa Claire Egan) will get updates on Ian’s latest demand. Michael will say Ian wants to make his statement in court. He’ll also inform them of the lab tech’s suicide. Michael will believe this could point to the man’s guilt, so he’ll head off to work on getting the charges dropped.

When Michael approaches Dylan and Paul about the idea, he’ll be told about a surprising development. They traced the money trail and found the name of the person who bribed the lab tech. Michael will be shocked to find out Victor wasn’t behind it.

The funds are tied to someone else instead.

Other “Young and the Restless” spoilers say Victoria will try to figure out what Luca’s deal is. She’ll wonder why Luca felt the need to keep tabs on her. Luca will claim he was concerned about Travis (Michael Roark) and what he could do to Newman Enterprises.

Victoria will look at pictures of Travis in a nice suit. She’ll learn that Travis grew up in poverty, but made a name for himself on Wall Street. He specialized in trading oil and other commodities. Luca will believe Victoria needs to come to the same conclusion he did.

He’ll insist that Travis is trying to destroy Victoria and her company.

Is Travis truly that shady or is he just a guy who’s running from his past? We’ll have to wait and see, but Victoria will certainly have a lot to consider. She may not be able to trust Travis, but she can’t trust Luca either.

Stick with the CBS soap to find out how Victoria will handle this mess.