The Young and the Restless Spoilers: Luca’s Guilt Hasn’t Been Confirmed – What If It Can’t Be Proven? 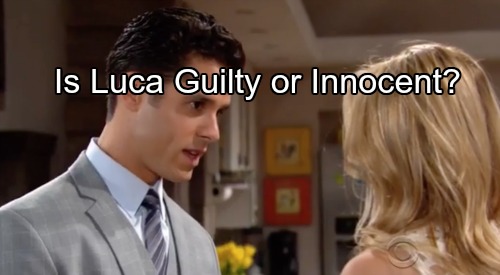 The Young and the Restless (Y&R) Spoilers have focused on Luca’s (Miles Gaston Villanueva) apparent involvement in Newman’s oil rig disaster. Yes, Luca openly told Summer (Hunter King) that his original intent was to use her in order to maintain access to her family’s business.

But, he genuinely seems to love this heiress and his main plans may actually have been altered by that emotional connection. However, The Young and the Restless spoilers tell us that Luca seems to have maintained a tail on Travis (Michael Roark) since he left town, which is odd. Plus, it remains possible that Victor (Eric Braeden) won’t be able to prove that Luca is a bad guy before Summer’s wedding takes place.

Luca was originally sent as the Santori clan’s emissary. His role was to safeguard their heavy financial investment in Victor’s company. When the Moustache finally severed that money link, Luca’s time in Genoa City seemed to be limited. But, he surprised everyone by claiming, or truthfully stating, that he couldn’t return home and didn’t want to. Add that to his then-intense feelings for Marisa (Sofia Pernas), and no flights were scheduled out of Wisconsin.

Victor and Phyllis (Gina Tognoni) reached a truce in an attempt to ensure that Summer doesn’t legally become ‘Suca’ via marriage. Fans of The Young and the Restless spoilers know that it’s reasonable to question the believability of ‘Villis’. It seemed rather preposterous to see Tognoni’s character sitting aside of Victor in his corporate office Skyping with Nick (Joshua Morrow) about Summer’s circumstance.

Phyllis didn’t even bristle during those scenes, which added to the unrealistic images. However, plots must be pushed forward in escapist fiction.

The plan to set a trap for Luca has potential. He offered to help Victor prove that Travis was behind the oil issues. Then, Luca was shown speaking with someone who was probably the private detective he used to take photos of Victoria (Amelia Heinle) with Travis earlier in the summer. So, wouldn’t it be interesting if ‘Villis’ isn’t able to prove that Luca is dirty? And, imagine if he actually wasn’t behind the oil fiascoes either.