The Young and the Restless (Y&R) Spoilers: Major GC Death – Could Nikki or Sage Die – 5 Characters on the Chopping Block 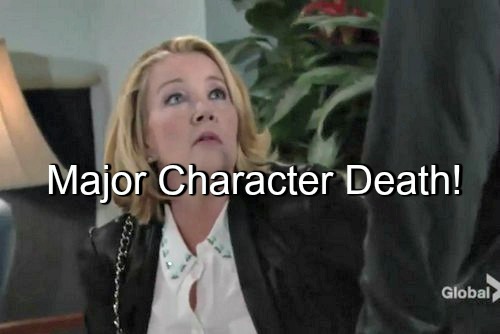 “The Young and The Restless” (Y&R) spoilers tease a major character death coming in new episodes on weeks ahead, but who could it be? Eric Braeden and Peter Bergman made it perfectly clear in a recent interview with KMTV that a major death would occur in Genoa City.

We’re looking at five possibilities that could be facing their demise in Genoa City and why they might die off – check these out and share your comments below.

Kyle Abbott (Lachlan Buchanan) tops our list for a couple of reasons. First, he’s never seen. Second, news broke that Lachlan Buchanan has been bumped down to recurring and is off contract. Third, his girlfriend Summer Newman (Hunter King) has a new love interest.

To make room in Summer’s life for Luca Santori (Miles G Villanueva), offing Kyle makes sense. Kyle has had no storylines in a long time and Y&R showrunners seem insistent on pairing Luca with Summer despite the protests of most everyone in Genoa City…

Sage Newman (Kelly Sullivan) is another possibility. Why? There has been some talk that Sage might be on the chopping block because Kelly Sullivan is considering leaving the show. If this is true and she’s looking for other opportunities, Sage could be killed off.

That would open up Nick Newman (Joshua Morrow) to be more of a problem in the marriage of Sharon Newman (Sharon Case) and Dylan McAvoy (Steve Burton). That could also work out to leave baby Christian with his biological dad Adam Newman (Justin Hartley).

Shawn Taylor (Devon Martinez) is not quite a major character, but she’s playing prominently right now and her kicking the bucket would be very convenient for Sage and Nick. Shawn has just given birth to her preemie son David and is having second thoughts on the adoption.

Sage is near frantic about losing yet another child if Shawn backs out of giving them her son. If Shawn were to reach an untimely end that would leave David available to go home with Sage and Nick and make a happy ending for them – although tinged with sadness…

Luca Santori (Miles G Villanueva) could be another potential death. He came to town with Marisa Sierras (Sofia Pernas) who has been moved to recurring status along with new fiancé Noah Newman (Robert Adamson). Y&R may send Noah and Marisa out of town and Luca to the graveyard.

Luca has annoyed everyone in Genoa City and has loads of enemies – plus his own dad, the elder Santori, doesn’t like his son much right now. Could Luca’s game playing with powerful people result in him meeting an untimely end?

Nikki Newman (Melody Thomas Scott) would be a big kill for the show, but she’s about to be at loose ends plot-wise. Y&R fans fully anticipate that Victor Newman (Eric Braeden) will soon divorce her since he told her he’s done and feels like she betrayed him with her testimony at his trial.

Eric Braeden also made it clear in an interview last month that he feels The Moustache should be done with Nikki forever after her disgusting betrayal.

Nikki is back on the bottle and her sober pal Neil Winters (Kristoff St John) has been moved to recurring as well. Could Nikki drive drunk yet again? Even if she doesn’t die, Y&R writers could certainly run her off the road and leave her in an open-ended coma that would take her out of the story.

What do you think Y&R fans? We were promised a death back in the Newman Tower fire on Halloween and none happened. Is this another Y&R spoilers released by showrunners to get us excited but then it never pays off? Or will someone really kick off this time?

Share your comments below and come back to CDL every day for more “The Young and The Restless” spoilers including day ahead spoilers.