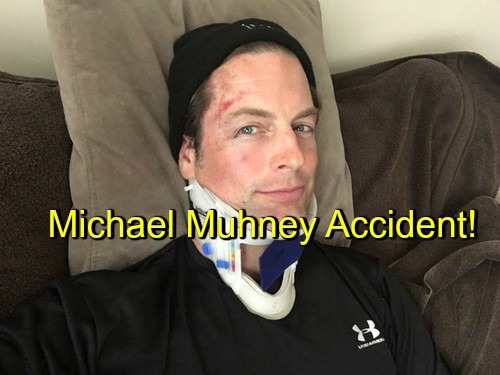 “The Young and The Restless” (Y&R) spoilers and news tease a bad accident for Michael Muhney. On Y&R there is more relationship trauma for the present Adam Newman, but former Adam portrayer Michael Muhney suffered literal trauma with major injuries from an accident at a California bike race this weekend.

Michael Muhney tweeted photos of bloody gashes on his head, hands, face, and thigh and you could see a whole section of his bike shorts were ripped away and his bike helmet looked like it had been run over by a truck. Muhney kept fans updated on his prognosis through a series of tweets.

In the first tweet showing the bloody injuries, Michael Muhney revealed that he was in the top three as the race neared its conclusion but then tragedy struck. Later he tweeted that he “suffered a concussion” then quipped “at least now I can donate my brain to NFL research.”

Michael Muhney’s injuries were severe enough to require medical attention and land him in a neck brace but despite what had to be a painful dilemma, the Y&R alum joked, “EMT guy said I somehow pull off the neck-brace look. Do you agree? #SexyNeckBrace” along with a laughing and crying emoji. 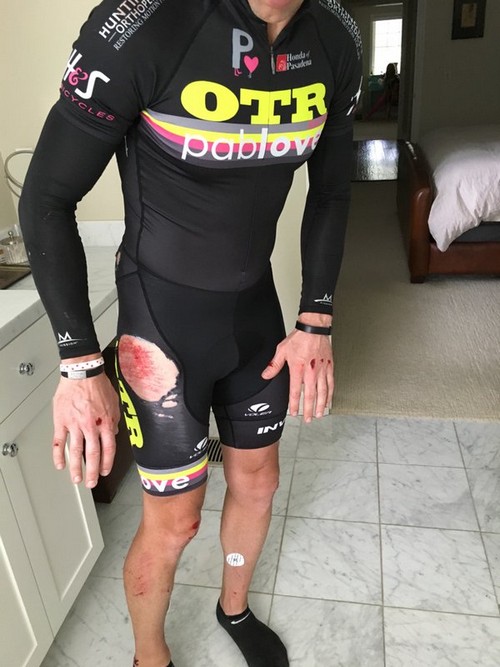 A few hours later, Muhney updated Y&R fans again this time tweeting, “I embrace the moments in life when I get knocked down. It makes me wiser, more careful and ultimately stronger. #literally #metaphorically”

What was really cute, though, was when Muhney shared a photo of his youngest son who had drawn “boo boos” all over his legs. Muhney tweeted that his son was showing empathy and was even limping around like his dad. Too cute!

Michael Muhney well knows the dangers of competitive cycling. Last October, he was at the Levi’s GranFondo charity bike race when he witnessed a fellow rider losing control of his bike and tumbling off a mountain road to his death.

At the time, Muhney tweeted, “There was a cyclist two people in front of me who went over a cliff & died. It was awful to see. Prayers for his family.” Despite that tragedy six months ago that he saw first-hand, Muhney is still riding.

In fact, the day before his painful accident, he shared on Twitter that he was going riding despite the rain. Let’s hope the talented former Y&R actor lands a new acting gig soon so he spends more time in front of the camera and less time on risky riding escapades.

In February, Michael Muhney tweeted that he was “sooooo close on a deal for a new series” but there have been no follow-up tweets nor anything new on his IMDB page. Wherever he lands, no doubt legions of Muhney fans will follow.

We hope Michael Muhney heals up fast from this painful accident and that his boo boos are nothing serious. And while we wish him luck at his new job, we’d be thrilled to see Muhney back on the soaps rather than primetime or films – perhaps on “General Hospital” or “Days of Our Lives”…

Share your comments below on Muhney’s accident and come back to CDL every day for more “The Young and The Restless” spoilers, news and more.

Soooooo…this happened today in a So Cal bike race (I was in the top 3 with 4 miles to go): pic.twitter.com/TiAA1nzBqD