BY Heather Hughes on May 17, 2016 | Comments: 18 comments
Related : Soap Opera, Spoiler, Television, The Young and the Restless 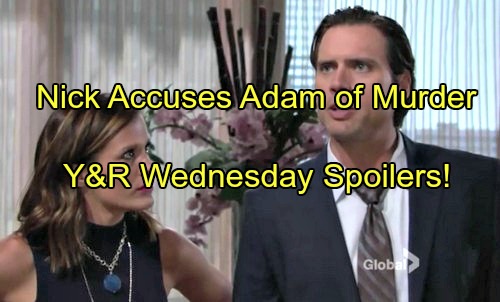 “The Young and the Restless” (Y&R) spoilers for tomorrow’s episode, Wednesday, May 18, tease that Sharon (Sharon Case) will try to get Mariah (Camryn Grimes) to drop her questions. She’ll hope to keep her secret under wraps, but Mariah won’t be willing to let it go.

Eventually, Sharon will crack and spill the whole story.

Mariah will be shocked by what Sharon has been hiding. She won’t understand how Sharon didn’t know about Sully. Sharon will explain that Dr. Anderson (Elizabeth Bogush) drugged her and she was told that Christian was her baby.

Mariah will wonder how long Sharon has been keeping a lid on this news. Sharon will admit that she found out just before Sage (Kelly Sullivan) died. She’ll say that Sage was going to tell Nick (Joshua Morrow), but she crashed before she could do it.

Mariah will be outraged that Sharon just stood by and let Nick suffer alone.

The Young and the Restless spoilers say that Sharon will defend her actions. She’ll insist that she wasn’t willing to give up this child that’s brought so much joy to her life. Sharon will point out that she was protecting Dylan (Steve Burton), too. He would be devastated.

Now that Sharon suspects the truth could be in Sage’s journal, Mariah will think she should come clean before Dylan hears it elsewhere. 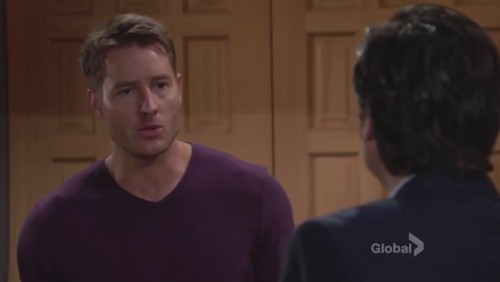 Meanwhile, Y&R spoilers say that Nick will show up at the penthouse ranting about Sage’s letter to Adam (Justin Hartley). He’ll demand to see it and explain that Sage made a confession about Adam in her journal. Nick will believe it was unforgivable.

A panicked Chelsea (Melissa Claire Egan) will let Nick know that Adam is gone. As he storms out, Nick will shout about getting payback. Later, Nick will visit Sage’s grave and state that she shouldn’t have carried such a heavy burden alone.

In prison, Adam will pay Victor (Eric Braeden) a visit to gloat about ruining his plan. He’ll insist that Victor shouldn’t bother trying another plot to get out early. Adam will think he can block whatever attempt Victor throws his way.

Victor will suspect that Adam is secretly scared. Adam will insist he’s not worried. He’ll assure Victor that the Newmans are better off without him. Victor will hint that Adam is going to regret all of this.

After Adam leaves, Victor will throw his fist into the wall. He’ll have a flashback of a confrontation with his own father, Albert Miller. Victor will remember yelling about the pain his dad caused. He’ll recall saying that wealth was nothing without his family.

At the athletic club, Lauren (Tracey E. Bregman) will urge Michael (Christian LeBlanc) to appeal his suspension. A short time later, Nikki (Melody Thomas Scott) will approach Michael for his assistance. She’ll give Michael updates on her plans for a divorce.

Other “Young and the Restless” spoilers indicate that Chelsea will fill Adam in on Nick’s new knowledge. She’ll fear that Nick found out about Christian’s paternity, but Adam won’t be so sure. He’ll think it could be something else Sage wrote about in her diary.

At the park, Sharon will be prepared to tell Dylan everything. Nick will arrive just in time to stop the confession. He’ll yell that he wants Adam arrested for murder. In Thursday’s episode, Adam will proclaim his innocence. Nick will demand to see the letter as verification.

Since Adam burned it, that’s a bit of a problem.

As for Sharon, she’ll think she can continue her ruse. Mariah will once again urge her to come clean on Thursday, but Sharon will vow to lie if it means keeping Sully. Dylan will walk in and overhear a portion of the argument. Y&R viewers will want to stay tuned for all of the drama.

Stick with the CBS soap to see how long Sharon can keep Dylan out of the loop.