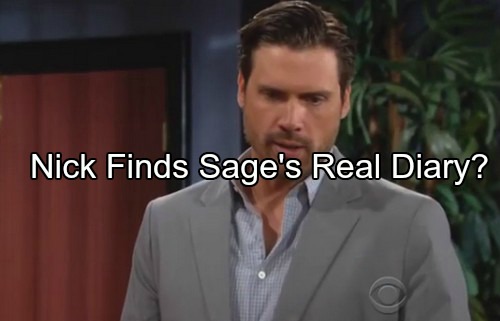 The Young and the Restless (Y&R) Spoilers focused on Adam’s (Justin Hartley) wrongful imprisonment in recent weeks. Facing 30 years behind bars at Walworth State Prison has drained the psyche of this ever-embattled Newman clan member. But, the missing evidence needed to prove his innocence has caught his brother Nick’s (Joshua Morrow) interest. Will this family foe actually become the person who helps Adam gain his freedom?

As The Young and the Restless fans know Nick hasn’t been fully open to Adam since he first moved to Genoa City. Of course, that was a number of years and a few actors ago, but who’s counting? That’s partially why Y&R spoilers fans are intrigued by Adam’s current plight and Nick’s entrance into this storyline.

Locating Sage’s (Kelly Sullivan) real journal pages is key to its resolution, but at this point only Victor (Eric Braeden) knows that Chloe (Elizabeth Hendrickson) has them hidden and is withholding said physical evidence out of spite.

The Young and the Restless spoilers recall that Sick wasn’t nearly as beloved as Shick, however Sullivan and Morrow did create a certain chemistry during their brief run together. Sage’s tragic death naturally devastated Nick and bizarrely created an opportunity for Victor to frame Adam.

The Moustache manipulated Delia’s (Sophie Pollono) mom into handling unseemly efforts related to the purported poisoning of Constance Bingham’s (Sally Kellerman) dead body and the forging of journal pages that appeared to be written in Sage’s handwriting. Said faux scribbles tagged Adam as having killed the elderly lady for reasons that seemed illogical, as Dylan (Steve Burton) and Paul (Doug Davidson) attested.

Adam was actually aided by Nick earlier in this arc, as fans of The Young and the Restless spoilers recall. Nick first refused, but then relented to having Constance’s body exhumed. The grieving widower was next in line to handle that legal decision because his wife was previously charged with the deceased Bingham’s affairs.