BY Heather Hughes on May 30, 2016 | Comments: 4 comments
Related : Soap Opera, Spoiler, Television, The Young and the Restless 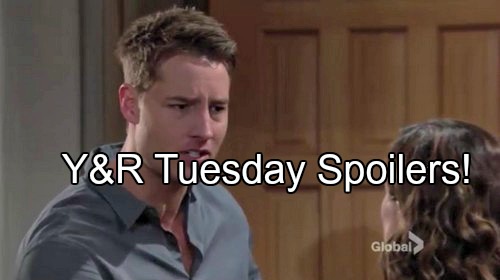 “The Young and the Restless” (Y&R) spoilers for this tomorrow’s episode on Tuesday, May 31, tease that Sharon (Sharon Case) will find herself in a jam thanks to Faith’s (Alyvia Alyn Lind) eavesdropping. After hearing Sharon say she couldn’t lose her baby, Faith will worry that Sully is leaving them. She’ll think he’s going to heaven with Sage (Kelly Sullivan) and Christian.

Dylan (Steve Burton) will walk in and wonder what’s going on. Sharon will indicate that it’s a misunderstanding. She’ll suggest that she was talking about Cassie (Camryn Grimes). After Sharon and Faith leave to see Nick (Joshua Morrow), Dylan will want answers from Mariah (Camryn Grimes). She’ll state that Sharon is just upset about Cassie.

Dylan will thank Mariah for being there for Sharon. He’ll urge Mariah to give him updates if anything is seriously wrong. Meanwhile, Nick will deny Adam’s (Justin Hartley) request to have Constance’s (Sally Kellerman) body exhumed again. Once Nick storms out, Chelsea (Melissa Claire Egan) will believe that Adam is out of options. He needs to tell Nick about Christian’s true paternity.

Adam won’t give up yet. He’ll feel like there has to be another way out of this mess. Unfortunately, things are about to get even worse. Michael (Christian LeBlanc) will call with the news that Adam’s trial date is set. His judge will be Elise Moxley (Jensen Buchanan). She warned Adam to stay out of trouble and she could come down hard this time around.

While Faith is getting ice cream, Nick will talk to Sharon in the park. He’ll confess that he has some doubts about Adam’s guilt. Nick won’t be sure that Sage would’ve kept a secret that big from him. Sharon’s nerves will kick in. She’s highly uncomfortable anytime secrets are mentioned.

Later, Mariah will let Sharon know that she hates lying for her. However, Mariah will suggest that she’s starting to see how much pain the revelation would cause. Dylan truly cares about his family and Mariah won’t want to tear everything apart.

Other “Young and the Restless” spoilers reveal that Luca (Miles Gaston Villanueva) will cause tension for several Y&R characters. Noah (Robert Adamson) will try to convince Summer (Hunter King) that Luca has been lying to her. She’ll insist that Noah is just jealous because she’s moving up at the company.

Noah will express his frustration to Marisa (Sofia Pernas), but she’ll think Luca will get what’s coming to him eventually.

At Newman Enterprises, Billy (Jason Thompson) will argue with Victoria (Amelia Heinle) about whether Luca is contributing to her success or setting her up for failure. Victoria will fib about Luca getting in touch with her when she was on her way back to the office. Billy will let something slip about the faulty oil rig and Victoria will realize that he must have hacked into the computer system.

Billy says that he asked Natalie (Mara McCaffray) to do it. He’s just trying to help.

Victoria will want Billy to butt out. Billy will start to rant, but he’ll receive a call that stops the discussion. They’ll leave to take care of Johnny, who has a virus. Summer will show up to get to the bottom of Luca’s lies. He’ll point out that Victoria confirmed he contacted her. Luca will ask if Summer is accusing him of lying as well. Summer will give Luca an apology and he’ll glance at Victor’s (Eric Braeden) portrait as they embrace.

At Billy’s place, Johnny will get tucked in and Victoria will join Billy for wine. When asked about his new love interest, Billy will joke about her being an ex-Navy SEAL and a rich model. Victoria will kid that she’s dating a rodeo cowboy. When the conversation goes nowhere, Victoria will get up to leave. The wine will leave her a little tipsy and she’ll fall back on the sofa.

Billy won’t let Victoria go home in that condition. By Wednesday’s episode, Billy will suggest they should admit who they’re sleeping with – for real this time. It seems doubtful that Billy will actually blurt out Phyllis’ (Gina Tognoni) name, but anything can happen if alcohol is involved.

Of course, Billy could always say it was Bethany (Chrishell Stause). It may not even matter if Victoria decides she’d rather not know about Billy’s newest conquest. She’s curious, but it could be incredibly painful. Stick with the CBS soap to see how the rest of this chat will play out.