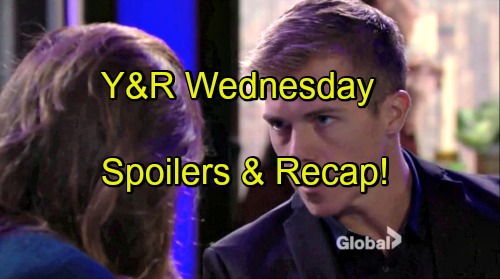 The Young and the Restless (Y&R) spoilers for Wednesday, October 5, tease that Sharon (Sharon Case) will try to convince Patty (Stacy Haiduk) to keep her secret. Patty will think the truth needs to come out, but Sharon will maintain that Sully is her child. He means the world to her and the same goes for Dylan (Steve Burton).

Sharon will finally get down to business. She’ll realize that Patty must want something. The Young and the Restless spoilers say Patty will admit that she wants to get out of there. If Sharon can help her, then Patty will promise to stay silent about Sully’s true identity.

Meanwhile, Dylan will figure out that the calls came from a repairman’s phone. He’ll track the guy down and learn that the phone was misplaced during one of his repair jobs. Kevin (Greg Rikaart) will try to pinpoint where the phone might have fallen into the wrong hands.

Mariah (Camryn Grimes) will fear that Dylan could be headed straight to Patty soon. She’ll frantically call and text Sharon until a message is finally received. Sharon will force Patty to hand over the phone.

She’ll reluctantly agree to help Patty get out, but she’ll warn that it won’t be right away. Sharon will need some time to make this happen.

At home, Sharon and Mariah will discuss their next move. Mariah will eventually take the phone to Hank’s bar, which was another one of the locations where repairs were made. They’ll hope to throw Dylan off the trail. Elsewhere, Dylan will notice that Patty’s facility is on the list of the repairman’s recent stops.

Other Young and the Restless spoilers reveal that Travis (Michael Roark) will have his first day at Newman Enterprises. When Victoria (Amelia Heinle) seems distracted at Brash and Sassy, Billy (Jason Thompson) will suggest that she should go over and see how things are going. Victoria won’t be sure at first, but she’ll end up taking Billy’s advice.

At Newman, Victor (Eric Braeden) will give orders to someone and indicate that he has a few suspicions. After his minion leaves, Summer (Hunter King) will enter with Travis. She’ll think Travis will be a real asset, but Victor will hint that he needs to see him in action first. Vic’s the kind of guy who likes to watch people perform under pressure.

Victoria will arrive and notice that everyone looks pleased to have Travis around. While Victoria is meeting with Victor, Abby (Melissa Ordway) and Summer will spot flowers that have been left for Travis. The card will wish Travis well now that he’s back in the saddle. Travis will be surprised when he realizes the flowers are from “Michelle.”

Later, Travis will run into Ashley (Eileen Davidson) at the park. He’ll wonder why Ashley had the flowers sent over. What’s going on here? Was the signature meant to taunt Travis about something? It should be interesting to see where this leads. It can’t be good news for Travis.

At Jabot, Phyllis (Gina Tognoni) will grumble about the harsh conditions. Jack (Peter Bergman) will ignore Phyllis’ complaints and refuse to help her with a new project. Y&R spoilers say Jack will focus on his own project instead. He’ll take a look at some information on Newman and the oil crisis. It appears Jack is ready to carry out his revenge plot.

Billy will meet up with Phyllis in the park, but she won’t appreciate his negativity. He’ll feel like Phyllis won’t really be happy with Jack. Phyllis will argue that whatever she had with Billy is over. She’ll think Billy is stuck living his life on the sidelines.

Billy will contend that he doesn’t do sidelines. When he finds Victoria at the club later, Billy will nag her about Travis’ first day. Victoria will point out that everybody thinks he’s great. Billy won’t hang around to hear Victoria sing Travis’ praises.

It seems like Billy is feeling a little lost, but a window of opportunity could be opening with a former flame. Trouble is on the way for Travis and Victoria’s relationship, which means Billy could have a chance to win her back.

We’ll give you updates as more details emerge. Stay tuned to Y&R and don’t forget to check CDL often for the latest Young and the Restless spoilers, updates and news.