The Young and the Restless Spoilers: Patty Escape Crisis Heats Up as Sharon and Mariah Panic – Phyllis Take Big Risk for Jack

BY Heather Hughes on October 27, 2016 | Comments: one comment
Related : Soap Opera, Spoiler, Television, The Young and the Restless 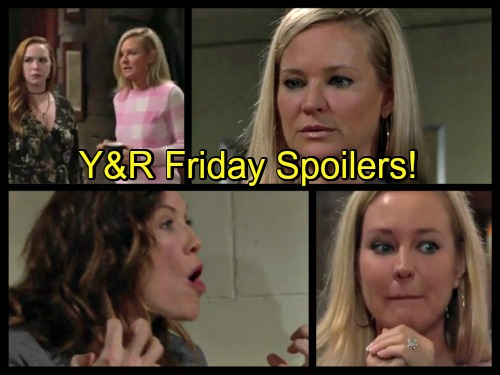 The Young and the Restless (Y&R) spoilers for Friday, October 28, tease that Kevin’s (Greg Rikaart) Halloween costume will catch Chelsea (Melissa Claire Egan) and Chloe (Elizabeth Hendrickson) by surprise. Once the shock of Kevin’s getup wears off, they’ll probably share a laugh about it. Chloe seems especially drawn to Kevin’s quirky side right now. She’s warming up to Kevin’s charm.

Kevin will also reach out to an old pal in Friday’s episode. The details aren’t clear, but we’ll know more soon enough. The Young and the Restless spoilers suggest that some juicy material is headed Kevin’s way. Y&R fans will see his storyline spin in several interesting directions.

Meanwhile, Sharon’s (Sharon Case) story is about to explode. We’re all gearing up for the big Sully-is-really-Christian reveal on November 1. Nevertheless, we still have to lay the foundation for the stunning moments to come. Sharon will once again turn to Mariah (Camryn Grimes) as she works to keep the truth under wraps.

It appears Sharon repeated her promise to Patty (Stacy Haiduk) during Thursday’s episode. Patty wants her freedom in exchange for her silence. The Young and the Restless spoilers say Sharon will urge Mariah to stick with her. She’ll insist that she needs Mariah more than ever.

Mariah will assume that Patty still expects them to help her escape. Sharon will likely confirm that it’s true, but what does she plan to do about it? It would be risky to actually aid Patty’s getaway. It’s tough to say how they’d even pull it off. Plus, Patty could always double-cross them once she was free.

Duping Patty again puts the secret in jeopardy, too. There’s no way Patty will let another betrayal slide. No matter what happens, Sharon’s secret is about to become public knowledge. GC Buzz will officially break the news, but we’ll see some major clues develop before that. Nick (Joshua Morrow) will have questions and Sharon will be forced to provide some answers.

Elsewhere, Jack (Peter Bergman) will load up stacks of cash in a briefcase. He’ll be ready to drop off the money and put the final nail in Victor’s (Eric Braeden) coffin. Unfortunately, Jack will realize he’s in a bit of a jam. He’ll worry that Victor will see him with the Newman mole.

Phyllis (Gina Tognoni) will quickly offer herself as an alternative. She’ll want to do her part by handing over the cash in Jack’s place. Phyllis’ marriage may have ended, but that doesn’t mean she’s stopped fighting for Jack. She would do almost anything to please him.

Since this plot involves targeting Victor, it’s even easier for Phyllis to make that choice. However, Victor encouraged Phyllis to give him updates on Jack’s moves. It’s the only way Victor will agree to call off his retaliation.

Phyllis is stuck between satisfying Jack or protecting him. Perhaps Phyllis will go through with Jack’s plan and attempt to take the fall when things get complicated. That might be her only beneficial option. Stay tuned to Y&R and don’t forget to check CDL often for the latest Young and the Restless spoilers, updates and news.

Patty is dancing as fast as she can! #YR pic.twitter.com/Ae6XwHUVbO