The Young and the Restless Spoilers: Phyllis Abandoned By Jack and Billy – Cheater Gets What She Deserves?

BY Sean O'Brien on September 27, 2016 | Comments: one comment
Related : Soap Opera, Spoiler, Television, The Young and the Restless 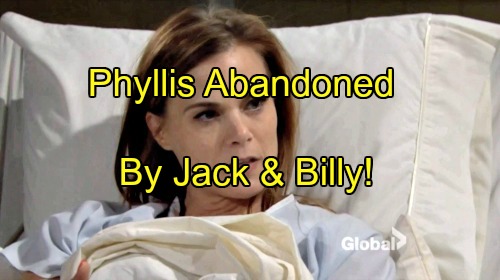 The Young and the Restless (Y&R) spoilers detailed the parallel rise of Philly and the fall of Phack. Now, Billy (Jason Thompson) has finally gotten the woman he’s been after for almost a year. But, will Phyllis’ (Gina Tognoni) love be enough to keep him interested for more than a handful of months?

Billy’s history with women, or with anything for that matter, is sketchy. He recently tagged his mother as the root of his problems. Blaming Jill (Jess Walton) further revealed how irresponsible the younger Abbott brother truly is. In his mind, as with most users, other people are always the cause of endless conundrums.

Honest souls know that other people can cause problems, but are never the only cause of all troubles.

Jack (Peter Bergman) and Phyllis were both in vulnerable positions when the first hints of Philly started to emerge on Y&R. Burgess Jenkins and Tognoni began playing verbal footsie in late 2015. At that time they were plotting the ill-fated revival of the Paragon Project. Their mutual hatred of Victor served as the basis for an initial friendship.

Later, after Jenkins’ version of Billy was beaten up by a bookie’s thug, Noah (Robert Adamson) unknowingly bumped into his former uncle-in-law in the Newman Towers garage. That scene established a switch point for Thompson to take over the role.

Thompson has noticeably played Billy in a far more moody manner than Jenkins. Thompson was likely chosen for this part because of his availability and because The Young and the Restless spoilers tell us that former head writer Chuck Pratt, Jr. planned to write the Billy character in a darker direction. Moving him back to similar scripts that Billy Miller studied, the 2016 edition of Billy Abbott has gone almost completely out of control 24-7.

In the past Billy would gain a love interest, often Vickie (Amelia Heinle), and then drag her with him on a debauched path. So, it will be interesting to see what Sally Sussman develops for this character now that she’s taken over for Pratt. Add Kay Alden, another Y&R alum, as a story consultant and Billy should be primed to explore engaging territory indefinitely.

Whether Billy chooses to keep Phyllis at his side, or if she allows him to remain attached to her, are interesting questions. Both characters possess reckless personalities, but do seem to care about each other. As with all new relationships, either in reality, or within Genoa City, predictions often represent mere opinion. So, it might be best to give Philly time to grow, rather than assuming it’s a non-starter.