The Young and the Restless Spoilers: Phyllis and Jack Reunite – Surprise Pregnancy For February Sweeps? 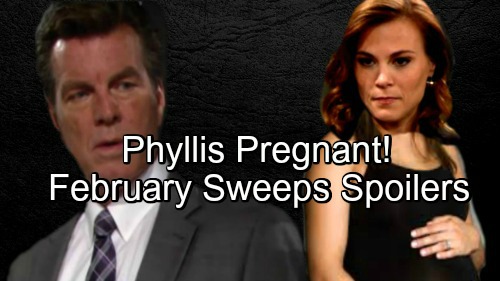 The Young and the Restless spoilers tease that Phyllis (Gina Tognoni) and Jack (Peter Bergman) will do more than reunite next year. They’ll also welcome their first child before Christmas 2017 arrives. The proposed timeline means that a burst of passion will link these two lovebirds together near to the time that Nielsen’s February Ratings’ Sweeps arrive. In fact we expect Phyllis to be pregnant with Jack’s baby for February Sweeps.

Jack is claiming to be through with her, yet can’t get Red out of his heart or mind. Yes, that’s what love does to some people. And with this couple there might be separation and then divorce, but Phack still isn’t dead. Savvy viewers know that the resistance Jack has been offering during the last few months is merely a form of self-defense. He needs time to heal which fits with this character.

Jackie-boy revealed his hand when he accepted Phyllis’ divorce counteroffer on the same day that Michael (Christian LeBlanc) verbally delivered it. As litigious as he’s been though the years, Jack’s inner thoughts were fully exposed as a result. How many scorned spouses would agree to allow their supposed lesser halves remain employed? And on the same floor no less. Soap operas do ask audiences to suspend disbelief quite often.

Phyllis knew that her personal and professional work wouldn’t be easy. But she was willing to complete whatever tasks were assigned to her at Jabot and, more importantly, stay within close proximity of the only man she’s ever truly loved. Some fans might inject the name Danny Romalotti (Michael Damian) at this juncture. But he was purely an obsession and that was the iconic Michelle Stafford’s classic version of Phyllis, not Tognoni’s.

Jack has three sons. Keemo (Philip Moon) and Kyle (most recently played by Lachlan Buchanan) are living. John Abbott III was the son Nikki (Melody Thomas Scott) lost when Victor (Eric Braeden) inadvertently caused her to fall down the stairs at the original Newman Ranch house.

Phyllis has two children, Daniel (Michael Graziadei) from Danny and Summer (Hunter King) from Nick (Joshua Morrow). Longtime fans know that Jack was twice in the running to be Summer’s father and he delivered her inside an elevator at Newman Towers.

An age difference does exist between the actors who portray Jack and Phyllis. Bergman is 63, but is in great shape. Tognoni turns 43 on November 28 and looks outstanding. So it’s still completely believable that modern day Phyllis could give birth to Smilin’ Jack’s fourth child right in time for Fall Sweeps 2017!

CDL is a leading source for everything linked to The Young and the Restless. Check back regularly for Y&R spoilers and news! Come join in the live Y&R discussion on our Facebook Page!