The Young and the Restless Spoilers: Phyllis Reveals She’s Pregnant – Is Jack The Baby’s Father? 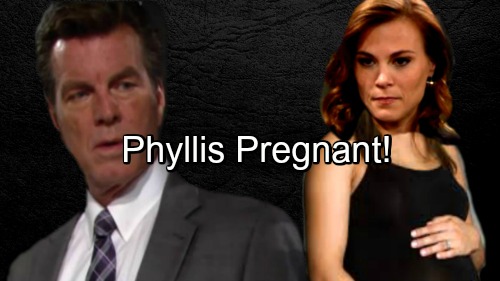 The Young and the Restless (Y&R) spoilers tease that Jack’s (Peter Bergman) rage won’t be subsiding anytime soon. Phyllis (Gina Tognoni) and Billy’s (Jason Thompson) betrayal has really affected him. Jack can’t believe Phyllis would cheat on him with his own brother. He feels like their marriage has been completely destroyed.

Jack will plot revenge on Phyllis, Billy and Jill (Jess Walton) for the roles they played in his pain. He’s just looking for anything that might make him feel better about the situation. Vengeance would probably be satisfying for Jack in the moment, but that pleasure can’t last. Even if Jack pulls off whatever he has in store, he’ll still have to deal with the heartache.

Phyllis isn’t ready to give up on their marriage, but Jack certainly appears to be done. It would take something big to change Jack’s mind about repairing the damage. Luckily, soaps tend to throw twists in the mix to prompt reconciliation.

If Y&R wants Jack and Phyllis back together, how could they achieve that? One way might be a surprise pregnancy. The Young and the Restless fans know that female characters often end up pregnant after sleeping with two men within a short period of time. A paternity mystery is always an option.

Phyllis would undoubtedly wonder about the identity of the “baby daddy.” She’d fear that a child with Billy would forever shut the door on her relationship with Jack. Who knows? Billy might even tamper with a paternity test in an effort to keep Phyllis. His love runs that deep! Besides, Y&R likes to drag these types of storylines out for added drama.

However, the truth would come out eventually. In this potential Young and the Restless scenario, making Jack the father seems like the logical thing to do. We’ve already got Billy as the possible father of Chloe’s (Elizabeth Hendrickson) daughter. No matter how that storyline turns out, Billy will be involved as a candidate thanks to the sperm swiping.

If Bella (Cali May Kinder) is Billy’s, then he can add her to his current brood and have plenty of tots. Jack, on the other hand, could use another child. He has Keemo (Philip Moon) and Kyle (Lachlan Buchanan), but they’re older and off canvas. What about a little girl? A pink bundle of joy might be just what Jack and Phyllis need to help them reconnect.

Phyllis and Jack have faced many obstacles, but they usually find a way to work through them. This time it’s tougher. Each hurdle becomes a bit harder to jump over. Now that Phyllis has committed the ultimate betrayal, Jack just isn’t sure he can forgive her.

Of course, a bouncing baby could change everything. Jack might realize that he wanted to stick with Phyllis and form a family. It could be a sweet storyline. Jack deserves some happiness after everything he’s been through.

Do you think the CBS soap might go in this direction? Could Phyllis be pregnant with Jack’s child? Would that be enough to bring them back together? We’ll give you updates if any news emerges on this possibility. Stay tuned to Y&R and don’t forget to check CDL often for the latest Young and the Restless spoilers, updates and news.