‘The Young and the Restless’ Spoilers: Phyllis’s Kidnapping of Adam To Be Exposed – Should She Be Charged For The Crime? 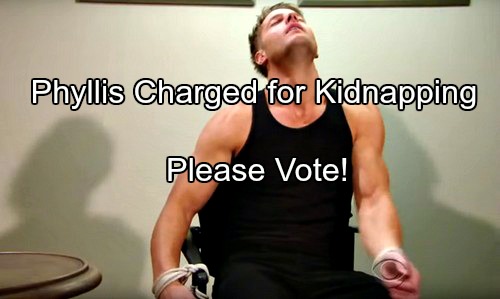 The Young and the Restless (Y&R) spoilers tease that Phyllis (Gina Tognoni) could find herself in deep trouble. It’s clear that Phyllis will soon face consequences for cheating on Jack (Peter Bergman). That’s just inevitable. However, there’s an even bigger issue that could resurface for Phyllis at some point.

Phyllis seems to forgotten have forgotten all about Adam’s (Justin Hartley) kidnapping. She was willing to do anything to gain control of the Pass Key situation. It was just one more way to get revenge on Victor (Eric Braeden).

Phyllis wanted to make sure Jabot came out on top, but she obviously took things too far. Although Phyllis claims she didn’t intend to hurt Adam, this was still a very serious offense, punishable by life in prison in many states. Adam was manhandled and held against his will. He thought he was in extreme danger.

Adam undoubtedly experienced severe emotional distress. The same goes for Chelsea (Melissa Claire Egan). She didn’t know if her husband would make it out of this alive. Phyllis was to blame for the whole frightening ordeal.

Phyllis’ crime faded away, but there’s a chance it could come back to haunt her eventually. After all, it took a long time for Victor’s day of reckoning to arrive. Just when Victor thought he would get off scot-free, he was finally punished for swapping Jack with Marco (Peter Bergman).

In other words, it’s definitely not too late for Phyllis to pay the price. It’s possible that Victor could try to blackmail Phyllis with the kidnapping info. Perhaps Victor knows the truth and has been waiting for just the right moment to spring it on Phyllis. Vic keeps dirty details like this in his pocket for a rainy day on Y&R.

Victor might suggest that Phyllis needs to support his release or at least keep her mouth shut during his appeal proceedings. If Phyllis doesn’t follow instructions, she could end up in a cell of her own. Even if Phyllis went along with Victor’s wishes, he could still double-cross her. The Young and the Restless viewers are aware that Victor isn’t exactly trustworthy.

Victor vowed to take down everyone who put him behind bars. Phyllis was leading the charge, which means the state pen could be in her future. Of course, we can’t assume that Victor will be responsible for bringing this news to light. There are other ways the secret could get out on The Young and the Restless.

Jack already knows that Phyllis was behind Adam’s abduction. Once Jack realizes that Phyllis has been cheating, he’ll likely blow his top. Jack’s jealous rage could prompt some reckless decisions. We wouldn’t put it past him to punish Phyllis by exposing her evil scheme.

Jack is a good guy, so he’d probably regret that move later. Nevertheless, people can have bouts of craziness when infidelity is involved. Jack is about to get updates on a betrayal like no other. Billy (Jason Thompson) will surely get some sort of payback as well.

Regardless of how it all goes down, do you think Phyllis will be charged for kidnapping Adam? Will that secret come back to haunt Phyllis sooner or later? Vote in our Y&R poll and don’t forget to check CDL often for the latest Young and the Restless spoilers, updates and news.