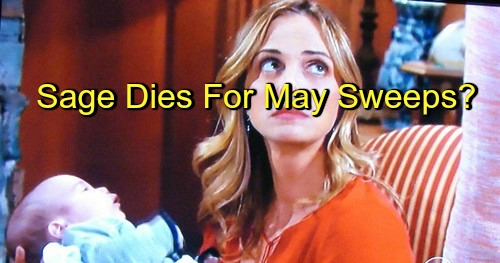 “The Young and The Restless” (Y&R) spoilers hint that a major character death that’s been buzzed about for May sweeps could be none other than Sage Newman (Kelly Sullivan). This seems shocking but with the cuts Y&R is making to the cast, anything is possible.

It would be pretty stunning for Y&R to make the long overdue “Sully is Christian” reveal only to kill off Sage when she’s been mourning her son for so many months. And how horrible would that be for Nick Newman (Joshua Morrow) to get Christian back then lose his wife?

The spoiler talk bouncing around the internet is that if Sage dies, Sharon Newman (Sharon Case) would be allowed to keep the baby since she’s been raising him thus far in his young life. While it’s true Sage’s death would open up storyline possibilities, it seems far-fetched.

But, then again, this is Y&R we’re talking about. With Sage out of the picture, that would leave Nick single and Dylan McAvoy (Steve Burton) is already struggling with Sharon’s closeness with Nick and that would antagonize things which would make for good plotlines.

Plus, Dylan will be left reeling when he finds out he’s once again childless. The Sully reveal will put Dylan and Sharon’s marriage at risk and with Nick in the mix, that’s more problems. Plus, there’s still the reveal of Adam Newman (Justin Hartley) as Christian’s dad to come.

Also, a new The Young and the Restless casting reveal has us wondering whether there’s some merit to the scuttlebutt about Sage dying. Justin Hartley’s girlfriend Chrishell Stause was just cast on Y&R as new gal Bethany. That could put a monkey wrench in several storylines.

Young and Restless plotlines seemed to be leaning for months towards a possible romance between Sage and Adam if the baby reveal split Nick and Sage. Of course, that seemed less of a concern after Adam came clean to Chelsea Newman (Melissa Claire Egan) about the baby.

But then again, it was easy for Chelsea to let it go when Christian was dead and there was no living child tying Adam to Sage. But with Christian alive, Chelsea might not be so easy going about her husband being father to another woman’s child.

With Stause’s Bethany new to the cast, there’s talk she and her real life honey Hartley might be destined for on-screen romance but Chelsea and Sage are obstacles. Could Stause have been brought in to keep Hartley happy with the notion to cut Sullivan to make room in the budget and story?

Also consider this – Kelly Sullivan’s Nickelodeon show “Henry Danger” was just picked up for Season Three and is doing quite well in the ratings. Sullivan also has a feature film in post-production and so she’s got irons in the fire she may want to pursue.

It could be a win-win if Y&R needs to keep trimming their cast and Sullivan has opportunities outside the CBS soap to pursue. So, while it seems a long shot that “The Young and The Restless” would kill off Sage, there may be merit to the talk.

Eric Braeden and Peter Bergman teased a “major” character death for May sweeps in a recent radio interview, but Y&R likes to misdirect and hint at events that never come to fruition so that might be nothing more than showrunner deception.

With The Young and the Restless May sweeps kicking off in little more than a week and Sage and Sharon on the cusp of the Sully reveal, we’ll see. And since Nikki Newman (Melody Thomas Scott) fell off the wagon, anyone in Genoa City could be at risk if she gets behind the wheel…

What do you think Y&R fans, do you think showrunners would kill off Sage just as she’s about to get her baby back? Would you be outraged? Share your thoughts below and come back to CDL every day for more “The Young and The Restless” spoilers and news.