The Young and the Restless (Y&R) Spoilers: Sage and Nick Split Over Christian – Back Together With Sharon After Sully Loss 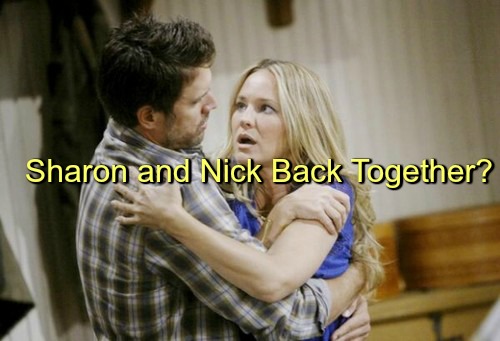 “The Young and The Restless” (Y&R) spoilers hint that the big paternity reveal of Adam Newman (Justin Hartley) as Christian’s dad will fracture Nick Newman (Joshua Morrow) emotionally and could drive the split of Nick’s marriage with Sage Newman (Kelly Sullivan).

This is a multi-faceted and devastating loss for Nick. First, he’s losing a baby that he’s loved since the child was born. Second, Nick will have to grieve the loss of Christian again. The first time it was a physical loss when they thought the baby died and this time it’s an emotional loss.

Third, Nick has to reckon with the anger he’ll feel when he realizes so many people he loves kept this secret from him. It’s not simply that Adam is the father of Christian. It’s that Adam, Sage and Victor Newman (Eric Braeden) stood by and watched him intensely grieve the death of a child that’s not his.

Nick will not understand how his father and brother could have stood by and watched him go through that pain without telling him. Of course, Nick still would have been sad that Sage lost her child, but it would have not been so hard on him if he knew the child was not his son biologically.

But most of all, Nick will likely focus his anger on Sage – and that could mean the end to their marriage. Sage already said she felt like they got married just because of the baby – and now finding out the baby wasn’t even Nick’s could be the beginning of the end for them.

From Nick’s perspective, Sage could have eased his pain significantly by telling him the truth. Plus, the baby’s fake death aside, Sage should have told Nick anyway – it would not be fair for her to let Nick spend his whole life thinking he was Christian’s biological father when he’s not.

Y&R spoilers hint that the reveal of Adam as Christian’s father will split Nick and Sage – and could see him back with Sharon Newman (Sharon Case) eventually. Sharon won’t handle the news well that she has to give Sully to Sage and could face a breakdown.

This could also mean the end of her marriage to Dylan McAvoy (Steve Burton) if their marriage can’t withstand more of Sharon’s mental shenanigans. Morrow hinted at just this outcome in a recent interview with Michael Fairman of On-Air On-Soaps.

When asked about Nick getting back with Sharon, Morrow said, “I don’t know the timeframe, but it certainly will happen again at some point. It’s a beautiful reunion if there are things that happen, and it causes them to come back together, because of circumstances.”

A paternity reveal is certainly a split worthy circumstance, so we may yet see the Christian truth will split Nick and Sage, and send Nick back to Sharon. And who knows what the ugly truth will do to Adam and Chelsea Newman’s (Melissa Claire Egan) relationship?

What do you think Y&R fans? How big will the fallout be from this paternity reveal? Will just one of the three couples involved split? Or two or all three? Share your comments below and come back to CDL often for more “The Young and The Restless” spoilers and updates.