The Young and the Restless (Y&R) Spoilers: Sharon Exposes Sully as Christian – Sends Anonymous Letter to Nick and Dylan 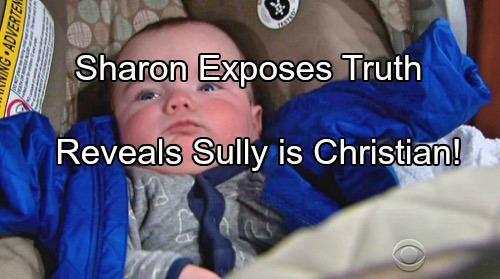 “The Young and the Restless” (Y&R) spoilers tease that the baby drama may pick up steam in the next few weeks’ episodes. Young and the Restless’ Head writer, Chuck Pratt, Jr. hints that Sharon McAvoy (Sharon Case) will walk away from the Christian/Sully ordeal unscathed, leading up to the fact that he must have some type of ace in the hole or get out of jail free card for poor ‘ol Sharon.

It leaves us wondering, what could Sharon do that will take the blame off her back?

“The Young and the Restless” spoilers have hinted for quite some time that Nick Newman (Joshua Morrow) will learn that Sully is really his son, but before that happens, reportedly, he will find out that Adam Newman (Justin Hartley) was Christian’s real daddy.

Of course, we all know when Nick stumbles on that little tidbit he will come unhinged and unleash his hatred (again) straight toward Genoa City’s human punching bag—Adam Newman.

So, that brings us to the original question. What can Sharon do to let the men in her life, Nick, Adam and hubby, Dylan (Steve Burton)—know that Sully is really Christian, but take the heat off her back at the same time.

An inside Y&R source told CDL that Sharon will write an anonymous letter to Nick and Dylan about Christian and reveal Sully’s true identity.  In Sharon’s mind, it’s the perfect solution.

Sharon’s biggest fear is she will lose Dylan. She told Mariah Copland (Camryn Grimes) on last week’s episodes that she could face losing her son if she was able to keep Dylan. She is worried about breaking his heart, and losing him.

Ultimately, Sharon knows the baby secret will come out, so she wants to try to control the way the message is delivered, and make sure none of the blame is placed at her feet.

“The Young and the Restless” spoilers tease that Sharon’s biggest fear is that Dylan or Nick will blame her for the baby mix-up, and accuse her of “stealing” Sage’s (Kelly Sullivan) child. She had no control over it and actually believed she is as big of a victim in the situation as Sage.

She hopes she can convince her ex-husband and current hubby that is the case, too.

Sharon decides to pen a letter detailing the baby mix up and reveals his real identity according to exclusive CDL Y&R spoilers. She arranges for it to be given to them via courier service, and hope they will have no way of tracing the letter back to her.

Sharon knows it’s a risk, but decides to take a chance, just to get the truth out in the open.

The one detail Sharon didn’t count on was Christian’s real dad is not Nick, but Adam. Stick with CDL for all your “The Young and the Restless” spoilers, news, and updates.