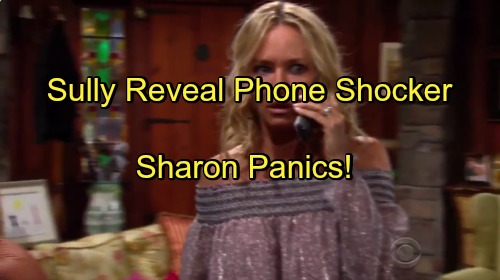 The Young and the Restless (Y&R) spoilers tease that Sharon (Sharon Case) will find herself facing a startling predicament. Viewers will remember that Sharon received some strange phone calls a couple of weeks ago. She was puzzled and a little weirded out. An unknown caller kept dialing Sharon’s number, but there was only silence when she answered.

Sharon’s minor annoyance is about to turn into a major shock. Y&R spoilers reveal that Sharon will get an alarming message. It appears Sharon still won’t be able to figure out the source of these communications. No matter who’s sending them, Sharon will realize that she’s in deep trouble.

What’s all of this about? Since Sharon’s main storyline involves hiding Sully’s identity, maybe the caller knows the secret. Sharon feels like she’s safe as long as she keeps her cool and Mariah (Camryn Grimes) keeps her mouth shut. However, there are several ways this information could get out.

First, there’s the nurse who helped Dr. Anderson (Elizabeth Bogush) pull off her plot. Sharon cornered her and managed to learn the truth. If the nurse let something slip, the secret could easily get passed around.

Of course, we also have Patty (Stacy Haiduk) to consider. Who knows what she’s been rambling about to various doctors and nurses? If someone manages to sort through the riddles and cowbird comments, Sharon could have a real threat on her hands.

The Young and the Restless buzz suggests that Patty will be popping up down the road during Fall sweeps. That would certainly be a treat for Y&R fans. Crazy Patty always keeps things interesting. She’s unpredictable and we can’t help but enjoy her lovable nuttiness.

Another option for the caller would be Victor (Eric Braeden) or someone on his payroll. Victor knew about Christian’s paternity and he blackmailed Adam (Justin Hartley) with it. He seems to have eyes and ears everywhere.

If Victor knows the truth about Sully, why has he kept quiet? Maybe Victor fears that it would only bring more pain. Since Adam is actually the father, Victor would realize what a crushing blow this would be for Nick. He might feel like it’s best to just leave it alone.

Still, this would be a nice secret for Victor to save for a rainy day. It could give him some leverage if he needs it. Sharon is extremely afraid of Victor right now. There’s probably a reason for that. The Young and the Restless could be setting something up. Victor might be trying to scare Sharon into keeping her husband under control.

Victor filed a restraining order against Dylan (Steve Burton), but that won’t keep him from digging around. Dylan is becoming obsessed with this case and he won’t stop until he gets some answers. Sharon’s secret could be Victor’s insurance policy. If Victor exposed it, Dylan would probably be so distraught that he’d forget all about his investigation.

We can’t count out Chloe (Elizabeth Hendrickson) either. She’s always up to something and she has serious connections to Victor. There’s even a possibility that the caller knows or wants something different. This storyline could be headed in some surprising directions.

Regardless, it looks like Sharon will be more nervous than ever. We’ll give you updates as other news comes in. Stay tuned and don’t forget to check CDL often for the latest Young and the Restless spoilers, updates and news.

No! We’re The Young and the Restless! Check out the first paragraph. pic.twitter.com/McOI0MI7H5