The Young and the Restless (Y&R) Spoilers: Stitch Gets Terrible News – Does Max Die?

BY Sean O'Brien on May 29, 2016 | Comments: 4 comments
Related : Soap Opera, Spoiler, Television, The Young and the Restless 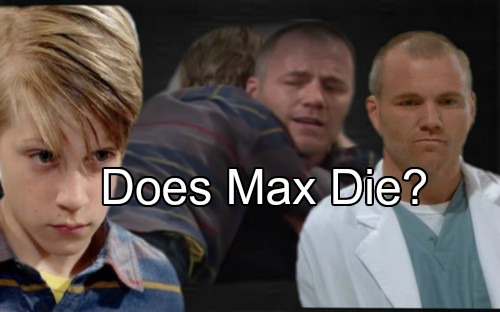 “The Young and the Restless” (Y&R) spoilers tease a tragedy may strike Ben “Stitch” Rayburn’s (Sean Carrigan) family once again on this week’s episodes. This time, his son, Max Rayburn (Jared Breeze) could even end up dying in a heartbreaking accident. If his son dies, how will Stitch find the strength to move on with his life with Abby Newman (Melissa Ordway)? Are they destined for divorce, whether or not Max lives or dies?

Ever since Max arrived in Genoa City, he’s been hell-bent on revenge aimed straight at step-mom, Abby. He held her personally responsible for his mother’s death and blamed her for his life being turned upside down. Of course, his mother’s death was not Abby’s fault, but Max placed the blame at her feet because his mom died while speaking to her on the phone.

Y&R spoilers report that there has been speculation on social media that Max could have been at fault for his mother’s death, but nothing supports that claim other than the fact he is severely emotionally disturbed, extremely violent, heartless, and a pathological liar.

For a while, Y&R spoilers claimed that Max will escape the mental institution and come back to wreak havoc on Abby, forcing her away from his father. Deep down, Max knows if Ben has to choose between them, he would toss Abby aside and side with him. This puts Max in a dangerous power spot, as he (falsely) believes he has the upper hand with Abby.

The Young and the Restless spoilers tease that Max will try to escape the facility, and possibly get into a horrific accident. It isn’t clear if someone runs over him or if his injuries are self-inflicted. Rumors say that Stitch arrives on the scene to see his child in a near death scenario, and it becomes too much for him to bear.

Y&R spoilers do not go into detail about what happens to Max on this week’s episodes, just that it is bad news and a terrible accident. It has become somewhat apparent in the past few weeks that the writers aren’t sure how to write Max. They aren’t sure if the best way to handle his storyline is to cure him and make him better or have him go off the deep end totally, and kill him off.

At this point, it seems like 50/50 odds that Max will live or die. It will all depend on what they can come up with the character. One thing is for sure is that Jared Breeze is a fantastic actor to be able to pull off acting like such a demonic child, with little to no remorse for killing his unborn sister, and trying to kill his step-mom.

Don’t forget to come back to CDL later for more “The Young and the Restless” spoilers, news, and updates.