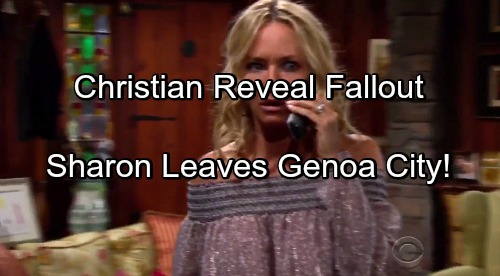 The Young and the Restless spoilers detailed the coming Sully-is-really-Christian reveal for months. Now, as the stretched storyline gets set to unfold, the woman at the center of another baby storm will be caught. After doing so, Sharon (Sharon Case) will leave Genoa City.

Now, many characters on The Young and the Restless have skipped town in the past. So, the wink at Christian’s faux mother leaving doesn’t mean that she’ll be gone for good, or that Case is exiting the cast. Many fans, but not all, are devoted Sharon fans.

Those within that contingent nod to Case as one of the best leading ladies Y&R has presented in the past twenty years. The likelihood of Y&R writing her off isn’t impossible, but seems misplaced.

Young and the Restless spoilers fans know that Sharon’s dilemma is multifaceted. One one side of her mind, she knows that she shouldn’t be lying to Dylan (Steve Burton) about ever having been pregnant. Sharon would have scored points all across Wisconsin and possibly as far south as Chicago, if she would simply have told everyone what Dr. Anderson (Elizabeth Bogush) did to Sage (Kelly Sullivan) and Nick (Joshua Morrow). But, she didn’t and that wasn’t smart.

Chelsea previously led Dylan to believe that he was Connor’s (Gunner and Ryder Gadbois) father. Years prior to that incident he and Avery (Jessica Collins) were expecting a baby. But, complications with the pregnancy led to a miscarriage. The fact that Sharon is aware of both key personal points and still carries on the fantasy that Sully is their child is just plain wrong.

Mariah (Camryn Grimes) has been emotionally manipulated by her mother into maintaining this lie as well. She strongly advised Sharon not to rationalize this situation, but failed. So, Mariah will also have her credibility damaged as soon as the truth is exposed.

Nick deserves further mention because he’s believed to be Christian’s father, when he’s not. But, Sharon doesn’t know that. Yet, she’s still going to be blamed for keeping this information from her ex-husband and the father of two of her children. Nick doesn’t know (yet) that his deceased wife had that baby via his apparently deceased brother Adam (formerly played by Justin Hartley).

Fans also recall that Adam’s death hasn’t been definitely confirmed, regardless of what evidence was found at the cabin. But, that tale is yet to be fully told as well.

Savvy Y&R fans will certainly create many solid theories regarding how the Christian reveal will develop. But, this speculative feature is about what happens to Sharon when the truth about Sully is told, or forced out.

So, beware of Case’s always tormented character becoming distraught and disappearing, for awhile, in the near future after this secret breaks.