The Young and the Restless Spoilers: Sully Reveal Leads To Dylan’s Death – Sharon and Nick Reunite? 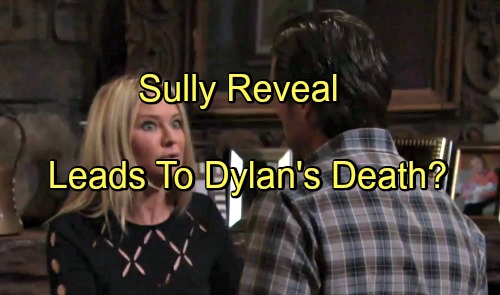 The Young and the Restless spoilers tease that Patty Williams (Stacy Haiduk) escape will do more than reveal Sully’s true identity. In addition to that storyline finally being pushed to a climax, Nick’s (Joshua Morrow) placement within those scenes will lead to a stunning ‘Shick’ reunion.

Sharon’s (Sharon Case) hands will appear to be clean, even though she will still be holding a dirty secret.

Savvy fans are right to wonder how Dylan (Steve Burton) could learn that Sully isn’t his child and not provide that information to Nick, who’s his brother. But, Sage (Kelly Sullivan) came to realize that Christian was still alive, right? Of course, she quickly ended up six feet under.

Dylan is currently out of town. His dad (Paul, Doug Davidson), who’s also the Genoa City police chief, recently sent him to testify in a court case. That invented plot point temporarily wrote one of the key players in this arc out of the picture.

Doing so allowed Dylan to invite his brother to stay at the cottage while he was away. That development was necessary so that Nick would be placed in Patty’s proximity.

Burton will film his final Y&R scene in December. This soap, like the others (except Days of Our Lives), records approximately six weeks in advance. It’s still October and Patty has just escaped from captivity. So, filling the approximate two-month time gap will prove to be rather intriguing using this scenario.

Assuming that the Dylan character won’t be recast, Mr. McAvoy could easily die in the line of duty, or at Patty’s hands. Yes, she’s his aunt. But, a pressured error could put her brother Paul’s son into another world

And, yes that was a reference to the soap opera that icons Irna Phillips and William Bell created. Bell, who also was the father of Y&R, saw that NBC show run from 1964-1999. Phillips died in 1973. 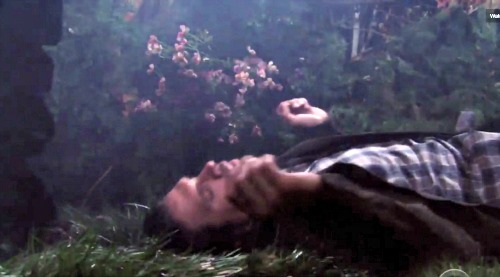 Note that the tone of deadly violence is reintroduced into the Sully reveal arc on this week’s (October 17-21) new episodes as Nick sustains a dangerous blow to the head that leaves him unconscious.

Of course we all know that Sharon’s little white lie about stolen Christian being Sully has already produced murder and death. The Young and the Restless spoilers fans will never forget Sage’s awful death nor Dr. Anderson’s brutal murder.

With the character that Burton first embodied out of the way a straight line to a ‘Shick’ revival will be opened. Rumors of Nick being paired with Chelsea (Melissa Claire Egan) didn’t feel right and should never come to exist.

Executive producer Mal Young and his team are projecting a return to Y&R’s glory days. What better way to unleash old-school fan’s emotions than by reestablishing Sharon’s love affair with Nick?

Of course, the Sully secret will hang over the reformed super couple like the Sword of Damocles. But, that’s what engaging daytime drama, combined with historical nods, have always been about.