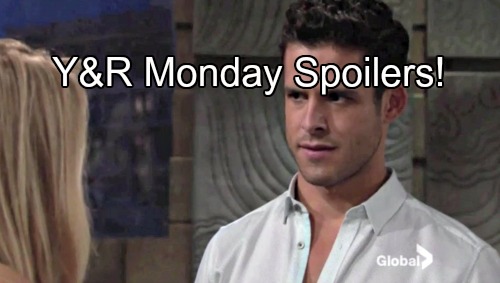 The Young and the Restless (Y&R) spoilers for Monday, August 15, tease that Chloe (Elizabeth Hendrickson) will have some doubts about Victor’s (Eric Braeden) plan. Victor will assure Chloe that this is their best option. She’ll hand over the journal entries and Victor will urge her to enjoy life with Bella (Cali May Kinder). Victor will suggest that Adam (Justin Hartley) has suffered more than enough.

In prison, Adam will have a nightmare about Victor working as a guard. They’ll clash about Adam’s fate and his potential happiness. Meanwhile, Chelsea (Melissa Claire Egan) will dream of Adam. She’ll reflect on all of the horrible things Victor has put them through. Chloe will arrive and push Chelsea to open up.

The Young and the Restless spoilers say Chelsea will talk about how much pain she’s in. She’ll be worried about Connor’s (Gunner and Ryder Gadbois) future. Chloe will see how much heartbreak Chelsea is dealing with. She’ll cry as she admits she wasn’t honest before. Part of Chloe was still angry with Adam. However, Chloe is starting to see that others have suffered as well.

Across town, Nikki (Melody Thomas Scott) will ask Victoria (Amelia Heinle) how she feels about leaving Newman Enterprises. Victoria will claim she’s happy with her decision, but she wishes Victor had fought harder for her to stay at the company. Nikki will believe Victoria needs to live her life the way she wants and never look back. That’s Victor’s philosophy.

At Jabot, Nick (Joshua Morrow) will give Phyllis (Gina Tognoni) updates on his investigation. He found something a bit unexpected. Luca (Miles Gaston Villanueva) fabricated evidence that points to Travis (Michael Roark), but he did it suspiciously quick. Nick will grill Phyllis about her scheme with Victor, but she’ll insist that they can be careful. Nick will admit that they need to work fast.

Elsewhere, Luca and Summer (Hunter King) will try to sort out the details of their impending nuptials. When Luca suggests getting married at Top of the Tower, Summer will wonder if there’s something he’s not telling her. She’ll fear that this is some type of test. Luca will confess that it is, but not one that’s meant for Summer. He wants to see if her family is truly supporting their union.

Summer will agree to the Top of the Tower idea and they’ll set a date. Next Friday is when Summer intends on becoming Mrs. Santori. After Summer leaves, Luca will get in touch with Travis. He’ll state that Victor is trying to blame him for the oil crisis. Travis won’t be worried about it. He’ll believe that Victoria will remain on his side.

Luca will hint that Victoria may not be in Travis’ corner anymore. He’ll lie about Billy (Jason Thompson) and Victoria’s reunion. At Newman, Victor will get filled in on Nick’s news. He’ll learn about Luca’s bogus evidence and announce that he’ll take care of it. Victor will plan on getting Travis back to Genoa City so he can disprove Luca’s claims.

Victor will find Travis’ phone number, but Nick will state that Victoria might be the only one who can convince him to return. Nick will head over to Victoria’s office to explain the situation. She won’t think Travis will come back, but Nick will believe she can talk him into it. He’ll plead with Victoria to do this for Summer’s sake.

At Newman, Phyllis and Victor will mull over their plot. Victor will reiterate that this wedding isn’t going to happen. Summer will waltz in with questions. She’ll get suspicious of what these two might be planning. Summer will wonder if a wedding sabotage is afoot.

It looks like Victor will try to toss some suspicion back on Luca. In Tuesday’s Y&R episode, Summer will ask Luca why he didn’t tell her about his meeting with Victor. Will Luca manage to play it cool? Stick with the CBS soap to see just how smooth Luca can be.