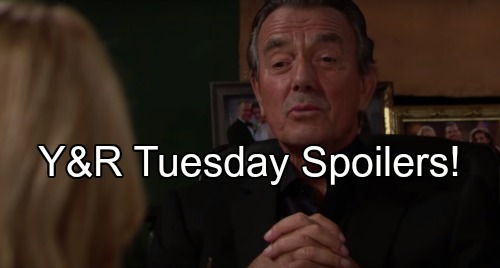 The Young and the Restless (Y&R) spoilers for Tuesday, August 9, tease that Luca (Miles Gaston Villanueva) will urge Summer (Hunter King) to marry him in a private ceremony away from Genoa City. Summer won’t go for that plan. She’ll want to be surrounded by her family and friends when she walks down the aisle.

Summer will insist that everyone will support or at least tolerate their union. Luca will confess that he talked it over with Victor (Eric Braeden). He’ll point out that Victor was surprisingly calm about their engagement news. At Jabot, Victor will approach Phyllis (Gina Tognoni) in hopes of teaming up. He’ll feel like they need to get Luca out of Summer’s life.

Phyllis will scoff at the idea of working with Victor. As Vic leaves, he’ll hint that Phyllis had better be careful. She could push Summer away with that temper of hers. Phyllis will complain to Jack (Peter Bergman) about Summer’s intentions. She’ll recall Summer’s marriage to Austin (Matthew Atkinson) and suggest that she doesn’t want Summer to get hurt again.

Jack will note that Summer is an adult and should be allowed to make mistakes. Phyllis will give in and imply that she’s willing to let go. Later, Phyllis will try to talk Luca out of rushing into this marriage. Meanwhile, Victor will assure Summer that he supports her. When Summer comes home, she’ll tell Phyllis that she wants to marry Luca as soon as possible.

Phyllis will reluctantly agree to help with the ceremony. However, she’ll call Victor after she leaves Summer’s place. Phyllis will say she’s willing to work with Victor if it means getting Summer away from Luca. They’ll intend on bringing Luca down together.

Other Young and the Restless spoilers say Charlie (Aidan Clark) and Mattie’s (McKenna Roberts) family tree project will lead to some surprising revelations. The twins will ask Neil (Kristoff St. John) about his parents, but he won’t offer any details. Neil will only state that he lost touch with them.

Lily (Christel Khalil) will sense that Neil is keeping a few secrets. She’ll press Neil for updates as they chat privately. Neil will admit that his dad raised him after his mom bailed. He won’t know if they’re still alive. Lily will chew Neil out for letting those relationships slip away, but he’ll insist that he doesn’t need them in his life.

At the Brash and Sassy office, Victoria (Amelia Heinle) will give Billy (Jason Thompson) advice about the company’s marketing strategy. Y&R spoilers say Billy will fantasize about Phyllis as Victoria explains the sexy ad. When Cane (Daniel Goddard) walks in, he’ll confront them about trying to muscle him out.

Jill (Jess Walton) will show up and attempt to calm the chaos. She’ll declare that the three of them will be a dream team. Jill will think they’ll thrive on competition. Cane will talk to Billy about Jill’s scheme to reunite him with Victoria. Billy will believe Jill is wasting her time. He’ll say he’s moved on with someone else.

Cane will quiz Billy about his new love interest, but Billy won’t offer any info. Cane will remind Billy that family is more important than anything. Elsewhere, The Young and the Restless spoilers say Jack will open up to Jill about his marriage. He’ll feel like Phyllis is having to try too hard. It seems something just isn’t right between them.

Jill won’t think Jack should worry about it. She’ll hint that Phyllis is simply doing whatever she can to repair their relationship. Jill will feel confident that things are moving along just fine.

Unfortunately, Jill is probably wrong about that. Trouble is undoubtedly on the way. Stay tuned to Y&R and don’t forget to check CDL often for the latest Young and the Restless spoilers, updates and news.