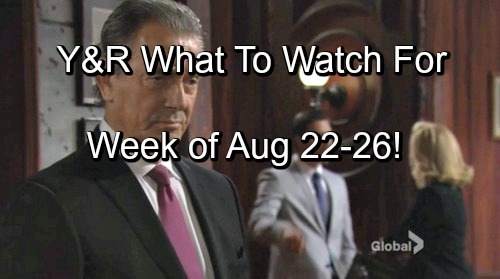 The Young and the Restless (Y&R) spoilers for this week’s episodes from August 22-26 tease that we’ll see several struggling relationships in Genoa City. Adam (Justin Hartley) will plead guilty to assault and it could leave his marriage in jeopardy. Chelsea (Melissa Claire Egan) will fear that Connor (Gunner and Ryder Gadbois) will have to live his childhood without his father.

Adam may begin to distance himself from Chelsea even more than before. Now Adam will probably feel like there’s truly no hope. The Young and the Restless spoilers reveal that Victor (Eric Braeden) will come up with a new plan, but it will come with huge risks and major costs.

Meanwhile, a few other plots will be in play. There’s a lot of wedding sabotage going on right now. Summer’s (Hunter King) decision to marry Luca (Miles Gaston Villanueva) has caused plenty of strife within her family. Many loved ones are desperate to bring Luca down.

Phyllis (Gina Tognoni) will offer her support to Summer, but is she really changing her tune? Time will tell, but we do know Phyllis will be awfully distracted this week. Y&R spoilers say Jack (Peter Bergman) will try to set the mood for love, but Phyllis just won’t give him the attention he’s looking for.

Jack constantly tries and fails to connect with Phyllis. She wants to repair the damage to her marriage, but it’s hard when she’s undoubtedly longing for Billy (Jason Thompson). Of course, Billy has another woman he’s quite close to. He’ll share a warm moment with Victoria (Amelia Heinle) soon.

Victoria will confide in Billy and the topic of love will likely come up. She may even be willing to talk about her feelings for Travis (Michael Roark). This conversation could be a little awkward, but it could also be enlightening for these two. Y&R fans will be anxious to see what’s next for Billy and Victoria.

Elsewhere, The Young and the Restless spoilers say Luca and Summer’s engagement party will get underway. A surprise guest will have Summer on cloud nine. Daniel (Michael Graziadei) will return to toast the couple and wish them a bright future. Summer will be pleased to finally have someone in her corner.

However, Summer is jumping the gun here. She shouldn’t be so sure that Daniel is on her side. Who might’ve summoned Daniel to this event? Could he be in cahoots with Phyllis? It’s possible. Then again, Daniel might have a different partner in crime. Noah (Robert Adamson) would be a good option.

Y&R spoilers indicate that Noah will insist on preventing Summer’s mistake. Noah feels like he knows Luca better than Summer does. He’s seen more of Luca’s sliminess and he can’t let Summer tie the knot with someone so shady.

Nikki (Melody Thomas Scott) may also lending a helping hand with Victor’s takedown plans. With all of these schemes in motion, there’s bound to be trouble. We’ll give you updates as other news comes in. Stay tuned and don’t forget to check CDL often for the latest Young and the Restless spoilers, updates and news.

#Retweet to unleash ur inner SOAP STAR! & be part of the huge Young & the Restless 11,000 episode celebration!#yr11k pic.twitter.com/DIw2gse67Y