‘The Young and the Restless’ Spoilers: Travis Back in Genoa City – Mal Young Hints at Michael Roark’s Return

BY Heather Hughes on August 3, 2016 | Comments: one comment
Related : Soap Opera, Spoiler, Television, The Young and the Restless 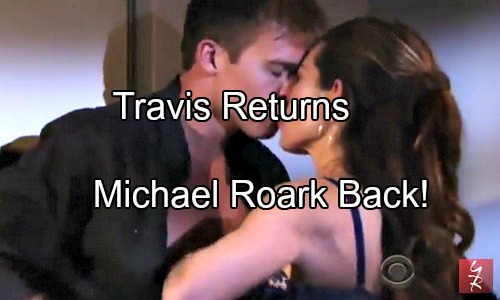 The Young and the Restless (Y&R) spoilers tease that we haven’t seen the last of Travis (Michael Roark). Mal Young, the executive producer of the CBS soap, has been dropping some hints about Travis’ return. One of his latest tweets definitely has Travis fans excited about a comeback.

A viewer recently sent Young a message about how much she liked the new direction of the show. She quickly added that if they would just bring “Tricky” back, then she would love it. Young quoted the tweet and suggested she should “stand by to love then.”

Of course, “Tricky” refers to the pairing of Travis and Victoria (Amelia Heinle). Many Young and the Restless watchers were happy to see Victoria get a new love interest, especially one as hunky as Travis. This hot bartender really won us over with his charm and sweet smile.

The news that Travis is apparently headed back to Y&R shouldn’t be too surprising. When Travis sold the bar and left town, Young tweeted that this wasn’t the end of the story. He claimed that it was merely the end of a chapter. Perhaps Travis will return with the mindset that he simply has to have Victoria in his life.

After Phyllis (Gina Tognoni) and Billy’s (Jason Thompson) affair is exposed, it’s going to cause major consequences. Victoria will undoubtedly be appalled by her ex’s behavior. She’ll probably lash out at Billy for betraying Jack (Peter Bergman). If Jill (Jess Walton) manages to bring these two together before the big reveal, they may be torn apart once again.

Billy might be placed back with Phyllis or even in a pairing with Chloe (Elizabeth Hendrickson). The latter might be an intriguing option if Billy turns out to be Bella’s (Cali May Kinder) father. Whatever the case, it would leave Victoria single and ready for a reunion with Travis.

It would be wise to keep Travis around since he’s become quite popular among fans. Roark is a solid actor and he’s certainly nice to look at. Most soap couples fizzle eventually, so we shouldn’t expect Victoria and Travis to grow old together. However, Travis could easily give his heart to someone else in town.

If Stitch (Sean Carrigan) and Abby (Melissa Ordway) can’t get past the baby drama, they may be getting a divorce. Travis and Abby might be a good match down the road. It would be interesting to see how Victoria would react to that romance.

Would it ignite a cutthroat rivalry? Could Travis cheat on Abby with Victoria? There would be plenty of juicy ideas to work with. Regardless, Travis could be on his way back to Genoa City soon. We’ll give you updates if we hear anything about Travis’ next Young and the Restless airdate.

So Y&R fans, what do you think about Mal Young’s hints? Have you missed Travis? Do you feel like Michael Roark was a valuable cast addition? Are you hopeful about Roark’s future with the show? Voice your opinion in the comments below and don’t forget to check CDL often for the latest Young and the Restless spoilers, updates and news.