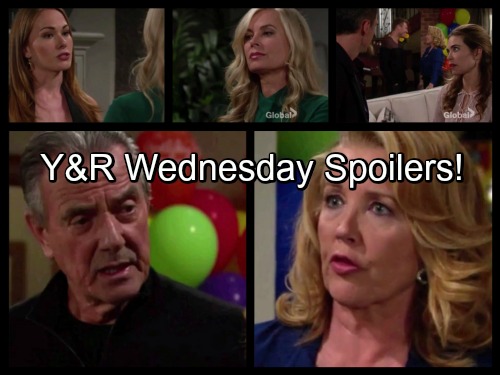 The Young and the Restless (Y&R) spoilers for Wednesday, November 16, tease that Nikki (Melody Thomas Scott) and Victor (Eric Braeden) will get into a huge argument. These two tend to butt heads fairly often, but they usually find a way to get through the rough patches. Victor and Nikki will undoubtedly get through this one as well, but it’s certainly going to take some work.

Now that Sharon’s (Sharon Case) secret has been made public, everything is spiraling out of control. Losing Sully was a terrible blow, but now Sharon is also worrying about the threat of prison. Her situation just keeps getting worse and she mainly has herself to blame.

Dylan (Steve Burton) doesn’t want to see Sharon go to jail, but he understands why Paul (Doug Davidson) and Christine (Laralee Bell) are pushing for it. Sharon obviously has some problems, but she was in her right mind when she decided to hide the truth. Nikki agrees that Sharon deserves to go down, but she might have a change of heart pretty soon.

Dylan isn’t happy with Sharon’s actions, but he still loves her deep down. It would be tough for him watch Sharon land behind bars. Of course, Nikki and Victor’s fight could also involve GC Buzz’s coverage of Dylan. It could even be about something as simple as Christian’s birthday party. Victor is only concerned about Nick (Joshua Morrow) and that could ruffle Nikki’s feathers.

Nikki will shout that she’s not going to throw away one son over the other. Victor will argue that sometimes you have no choice. While Victor and Nikki face off, Michelle (Kelly Frye) will give Ashley (Eileen Davidson) some shocking updates. The Young and the Restless spoilers say Michelle will admit she made love with Travis and it was better than it’s ever been.

In the meantime, Billy’s (Jason Thompson) suspicions will grow. Travis’ text to Michelle tipped him off to some funny business. The Young and the Restless spoilers state that Billy will spot Travis chatting with Nikki. When Victoria catches Billy with an anxious expression, she’ll ask if something is wrong.

Billy may brush off that idea until he knows more. After all, Billy recently urged Victoria to give Travis another chance. He thought Travis was a decent guy who could bring Victoria happiness. It sounds like Travis is going to bring Victoria loads of heartbreak instead.

On the bright side, this should set up a reunion between Billy and Victoria. It won’t happen overnight, but we’ll see them get back together sooner or later. Jill should be thrilled when her wish finally comes true. Stay tuned to Y&R and don’t forget to check CDL often for the latest Young and the Restless spoilers, updates and news.