The Young and the Restless Spoilers: Victor Brings Travis to The Dark Side – Dylan Ponders Mystery – Mariah Quits

BY Heather Hughes on September 28, 2016 | Comments: one comment
Related : Soap Opera, Spoiler, Television, The Young and the Restless 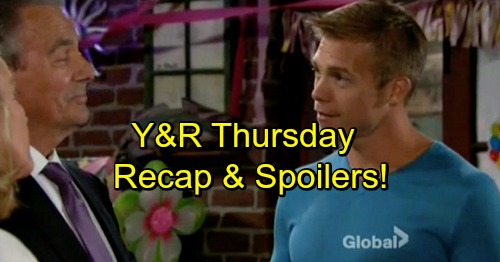 The Young and the Restless (Y&R) spoilers for Thursday, September 29, tease that Chloe (Elizabeth Hendrickson) will fill Chelsea (Melissa Claire Egan) in on her suspicions. She’ll suggest that Sharon (Sharon Case) is trying to push Nick (Joshua Morrow) in Chelsea’s direction. Chelsea will maintain that they’re friends and nothing more.

When Chelsea takes Faith’s (Alyvia Alyn Lind) dress over to Sharon’s place, she’ll share a few warm moments with Nick. Sharon will notice that they seem close. Faith will put on her dress and give Chelsea a hug for coming through for her.

Nikki (Melody Thomas Scott) will remind Victor (Eric Braeden) that they’re going to Faith’s party later. He’ll hope that Travis (Michael Roark) will be attending. Nikki will ask what Victor is up to and he’ll give her updates on his recent offer. Victor will remain hopeful that Travis will come around on the idea of working at Newman.

At Crimson Lights, Mariah (Camryn Grimes) will open up to Dylan (Steve Burton) about Chloe. She’ll worry that Kevin (Greg Rikaart) could be hurt by Chloe’s deception. Once the party gets underway, Dylan will approach Victor. They’ll shake hands and try to put their issues behind them.

Nikki and Sharon will marvel at their husbands making peace. When Nikki mentions how big Sully is for his age, Sharon will get a little nervous. Nearby, Mariah will want to get a few things straight with her foe. Chloe will comment on Mariah’s envy. She’ll try to clarify why she changed her mind about dating Kevin, but Mariah won’t be in the mood to listen. 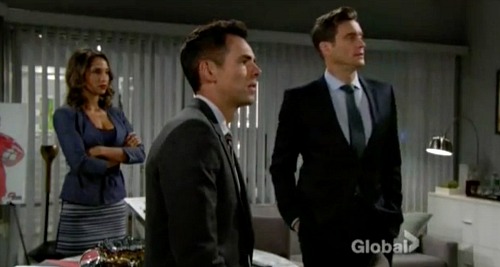 Chloe will think they need to get past this if they expect to work together. Mariah won’t see the point. She’ll announce that she’s quitting her job. Kevin will find Mariah later and ask her about it. He’ll wonder if jealousy is the reason she quit. Mariah will urge Kevin to see Chloe for the liar that she is.

Kevin will stand by Chloe, so Mariah will surrender. She’ll imply that Kevin shouldn’t come crying to her when this comes back to bite him. As for Faith’s birthday celebration, she’ll have a great time. After Victor brings out the cake, Faith will glance at Nick before making a wish.

Victor will state that he’s giving Faith shares in Newman Enterprises for her birthday. Nikki will quickly add that they bought Faith a pony, too. Naturally, Faith will be on cloud nine. Back at the penthouse, Faith will chat with Chelsea while Nick takes Connor (Gunner and Ryder Gadbois) upstairs.

The Young and the Restless spoilers say Faith will share that her wish came true. She wanted Nick to be happy again and she feels like he is thanks to Chelsea. Nick will return and hug Chelsea on his way out.

At home, Dylan will be puzzled when a caller hangs up on him. He’ll wonder why this has been happening so much lately. Y&R fans can expect Dylan to go on a search for answers soon. At the club, Victor will keep his eye on the prize. He’ll tell Travis that Jack (Peter Bergman) is targeting his company and he needs a strong team player. It looks like Victor may bring Travis over to the dark side.

Elsewhere, Hilary (Mishael Morgan) will debut in her new role as GC Buzz host. Her report on Jack and Phyllis (Gina Tognoni) will go over pretty well. Cane (Daniel Goddard) and Billy (Jason Thompson) will note that Hilary wasn’t as cruel as she could’ve been.

Jack is ready for a D-I-V-O-R-C-E. Phyllis, not so much. @ginatognoni #YR pic.twitter.com/VvlvQlIGmV