BY Heather Hughes on May 18, 2016 | Comments: 6 comments
Related : Soap Opera, Spoiler, Television, The Young and the Restless 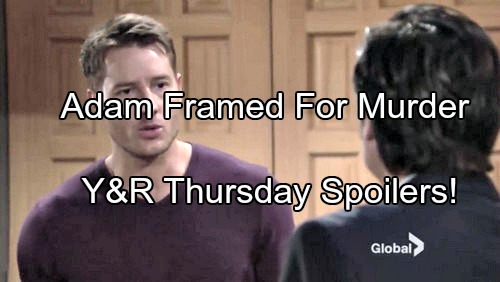 “The Young and the Restless” spoilers for tomorrow’s episode, Thursday, May 19, tease that big drama is about to go down. In the park, Nick (Joshua Morrow) will insist that Adam (Justin Hartley) murdered Constance Bingham (Sally Kellerman). He’ll hand the journal to Dylan (Steve Burton) and state that Sage (Kelly Sullivan) claimed Constance found out there was a phony Gabriel.

Dylan will head off to confront Adam with Nick’s suspicions. Sharon (Sharon Case) will comfort Nick and urge him to forget about reading Sage’s journal. It’s obviously causing a lot of pain. Nick will confess that he already looked through all of it. He’ll be upset about Sage’s heartbreak over Christian’s death. Sharon will give Nick a hug and offer reassurance.

At the penthouse, The Young and the Restless spoilers say Adam will be stunned by Dylan’s news. He’ll deny the accusations and Chelsea (Melissa Claire Egan) will agree that this is ridiculous. Dylan will announce that there are plans to exhume Constance’s body so they can get to the bottom of this.

Meanwhile, Kevin (Greg Rikaart) will apologize to a distracted Mariah (Camryn Grimes). When Kevin asks what’s up, Y&R spoilers say Mariah will complain about knowing something. She’ll suggest that so many people are going to get hurt. A message from Natalie (Mara McCaffray) will come through for Kevin. Mariah will take that as her cue to leave.

At Sharon’s place, Mariah will find Nick speaking with Sharon. After Nick departs, Mariah will rant about Sharon keeping the secret. Sharon explain that there was nothing about Sully’s true identity in the journal. Mariah won’t think that means Sharon should just let this go on.

Sharon won’t have a problem with lying if it means keeping Sully. Mariah will protest that she would be forced to lie, too. Dylan will walk in on the end of their conversation, but he’ll be too wrapped up in the Constance case to pay attention.

Mariah will get fed up and storm out. Meanwhile, Summer (Hunter King) will have her own set of problems. She’ll talk to Luca (Miles Gaston Villanueva) about her family’s issues. Summer won’t be happy with how she’s being treated at work either.

“The Young and the Restless” spoilers say Luca will urge Summer to take his guidance. He’ll offer some suggestions and Summer will be pleased with his business strategy. Summer will want Luca to type an email to the executives. She’ll think she can sign Victoria’s (Amelia Heinle) name on it to impress her.

Why is Summer so dumb – she is in essence committing forgery, regardless of her good intentions.

Luca will also have a chat about love with Travis (Michael Roark). At Hank’s bar, Luca will pretend to be a heartbroken patron. Travis will mention “Tori” and how she bailed due to complications. Luca will just smile mischievously. Later, Victoria will show up to see Travis and hint that she may have overreacted a little.

Back at the penthouse, Nick will arrive to give Adam a piece of his mind. Adam will assure Nick that he didn’t kill Constance. Nick will want to see Sage’s letter, but Adam will state that she didn’t say anything about Constance in it.

Adam will have a light-bulb moment as he realizes Victor (Eric Braeden) could be behind this madness. He’ll think Victor might be framing him for murder. Y&R viewers certainly wouldn’t put it past Victor. He loves a good setup.

Stick with the CBS soap for updates on Adam’s attempt to prove his innocence.