‘The Young and the Restless’ Spoilers: Victor Gives Guard the Slip, Escapes Hospital for Showdown with Ian 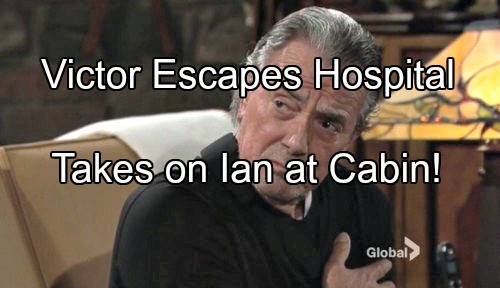 The Young and the Restless (Y&R) spoilers for tomorrow’s episode, Tuesday, July 5, tease that Ian (Ray Wise) will decide he could get a sizable ransom for Nikki (Melody Thomas Scott). He’ll force Nikki to call Victor (Eric Braeden) and make some demands. Over the phone, Nikki will nervously state that Ian will trade her for $5 million.

When Phyllis (Gina Tognoni) starts yelling, Ian will quieten her down and grab the phone from Nikki. He’ll indicate that Victor had better transfer the money or else. Meredith (Alicia Coppola) will think the police need to hear about all of this. Victor will refuse to pass along any details. He’ll insist on handling this himself.

In Sharon’s (Sharon Case) room, Dylan (Steve Burton) will ask his wife how she’s doing. Paul (Doug Davidson) will arrive with some possible leads. After Dylan takes off to help, Kevin (Greg Rikaart) and Mariah (Camryn Grimes) will come in for a chat with Sharon.

Kevin will let Sharon know that he’s in the loop on her visions of Sage. Once they take Sharon home, she’ll worry that Kevin will blab. The Young and the Restless spoilers say Sharon will question what Kevin wants. She’ll wonder if Kevin expects something in exchange for his silence.

Kevin will still believe Dylan should be aware of what’s going on, but he’ll say he just wants Sharon to take her medications. Mariah’s safety will be Kevin’s top priority. Sharon will consider it and announce that she’ll go back on her meds.

At the athletic club, Billy (Jason Thompson) will suggest that Jack’s (Peter Bergman) marriage is crumbling. Jack will reply that he’s not going to let that happen. He’ll refuse to lose Phyllis. When Jack says that he should go check on Phyllis at the cabin, Billy will discourage the idea.

Jack will hint that Billy and Phyllis seem to have formed a deep connection recently. Nick (Joshua Morrow) will also find himself in need of a pep talk in Tuesday’s Y&R episode. Jack will assure Nick that Nikki will be returned. He’ll contend that Nick shouldn’t give up on Victor’s attitude either.

Meanwhile, Billy will try to console Victoria (Amelia Heinle). She’ll be completely distraught over the whole ordeal with Victor and Nikki. Victoria will break down in Billy’s arms. Billy will reveal that he’s sorry for how he’s treated Victoria lately.

He’ll make it clear that he intends to be a good friend moving forward.

Back at the hospital, Victor will manage to give the guard the slip. At the cabin, Phyllis and Nikki will mull over the situation. Nikki will remain hopeful that Victor will come through for them, but Phyllis will be concerned about him making things worse.

Suddenly, Victor will walk in for what could be his final faceoff with Ian. He’ll offer a stern warning about this tense showdown. Victor will declare that Ian will die this time. Will Victor really succeed in defeating this formidable foe?

The Young and the Restless viewers will be anxious to see which one comes out on top.

By Wednesday, the news will begin to spread about Phyllis’ involvement. Dylan and Paul will give the Newman family updates on Ian’s location. Summer (Hunter King) will freak out when she hears Ian is at the cabin. She’ll know that her mom is in extreme danger.

Later, Ian will make sure Phyllis and Nikki don’t get in his way. They’ll be hustled out of the cabin so he can battle it out with Victor alone. Y&R fans should definitely check out all of the action! Stay tuned and don’t forget to check CDL often for the latest Young and the Restless spoilers, updates and news.