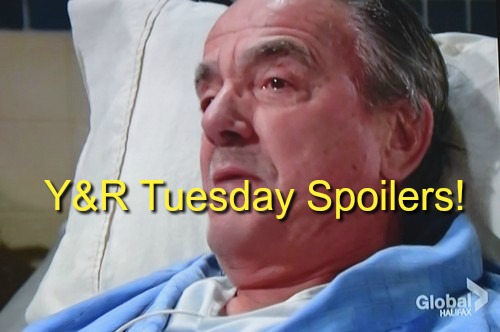 “The Young and the Restless” (Y&R) spoilers for the Tuesday, March 1, episode reveals the Newman family betrays The Moustache and sends their benefactor to the hospital. Sage (Kelly Sullivan) and Nick (Joshua Morrow) will take a huge step forward in their quest to adopt a child. They’ll meet with a pregnant teen named Shawn (Devon Martinez), who might be willing to give them her baby.

Later on tomorrow’s episode, Sharon (Sharon Case) will ask Nick if he really thinks this is a good idea. It might be a little soon, but Nick will believe it’s for the best.

The Young and the Restless spoilers tease that at the penthouse, Chelsea (Melissa Claire Egan) will open up about her fears. She’ll tell Nikki (Melody Thomas Scott) that Adam (Justin Hartley) could get in over his head. That’s why Chelsea wants to be certain Nikki’s plot won’t pan out. Nikki will suggest that she’s dropping the idea anyway.

Chelsea will still be worried about Adam running into trouble. She’ll contend that it could mean the end of her marriage. Adam will show up and let Chelsea know that he’s done with Victor as well as Newman Enterprises. Y&R spoilers tell us that Chelsea will mention moving to Paris, but Adam will imply that they may not need to. Victor should get what’s coming to him before long.

Paul will place Victor under arrest, but an unexpected health issue will arise just as he moves in with the handcuffs. Victor will declare that he needs to go to the hospital, but Nikki think Victor is faking it. She’ll suspect that Victor is just prolonging the inevitable. Nevertheless, Paul will call an ambulance and make sure Victor gets checked out.

Meanwhile, the news of Victor’s arrest and hospitalization will make waves around Genoa City. Abby (Melissa Ordway) will be stunned by Victor’s actions, but Victoria will insist that she can’t tell Stitch (Sean Carrigan). Things could get ugly if Stitch learned what truly happened to Kelly (Cady McClain) right away. He might not be willing to save Victor.

Fortunately, Victor’s doctors will determine that he’s going to be fine. The Newmans will gather around Victor’s beside to rip into him for bringing Marco to town. Victor will face a round of outbursts from his brood. They’ll be disgusted by Victor’s ruthless behavior.

As they start grilling him about his evil scheme, Victor will shout that they’re all traitors. He’ll add that they would be nothing without him. Y&R viewers will be anxious to see how Victor fares on his own. He may struggle now that his family has turned against him. Stick with the CBS soap for updates on Victor’s attempt to get out of this mess.