The Young and the Restless (Y&R) Spoilers: Victor Newman Revealed as Major Character Death – Shocking Fate of The Moustache 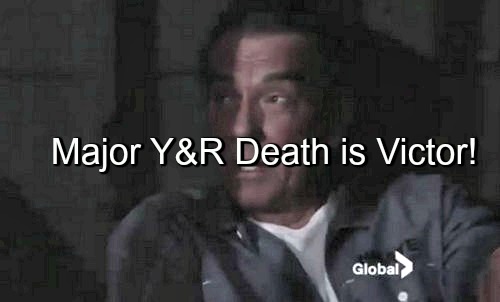 “The Young and The Restless” (Y&R) spoilers reveal that the major character death hinted at in a recent KMTV interview with Peter Bergman and Eric Braeden is none other than Victor Newman! But how and why does Victor Newman (Eric Braeden) die? Here’s what you need to know.

Victor’s life has been threatened in prison – a booming voice warns “Victor Newman, you’re a dead man.” It looks like the voice was right – Victor will get out of jail soon – but in a body bag. The character “death” is part of a prison break scam but The Mustache isn’t really kicking off.

Y&R showrunners have fooled us before with character death fake-outs. The major character “deaths” promised at the Newman Tower fire were Ian Ward (Ray Wise) and crazy Patty Williams (Stacy Haiduk) though neither really died.

Victor was recently stabbed in jail and Ian swore it wasn’t him and even offered to protect Victor. Although Victor initially turned Ian down, things may have changed with this new death threat that Victor (and the whole prison) will hear over the loudspeaker.

Ian intimated to Victor that he was planning a jail break – and Victor knows that Ian can get out of the prison. But will Victor break out with Ian – or work out his own jail break? The Young and the Restless spoilers say that Victor’s shot at getting out of jail may involve new character Dr Meredith Gates (Alicia Coppola).

Y&R spoilers reveal that the prison doc has secrets of her own that may play into Victor’s storyline. Meredith offers Victor some advice about staying alive in prison, but he won’t like what he hears. Can Victor convince the doctor to help him fake his death?

We know Victor has two goals right now. First and foremost is staying alive. Second is to punish all the traitor Newmans that testified against him and helped send him to jail. Victor can accomplish both these goals much more easily if he’s OUT of jail.

Victor’s got a 10-year sentence hanging over his head and a death threat to deal with too, so a prison break seems like the perfect solution. Once he’s on the loose, then he can figure out how to get his conviction overturned and get back at his family.

If Victor can bribe Dr Gates to help fake his death and perhaps get Ian on the scheme, he’ll be set. And whatever secrets she’s hiding, no doubt big money from Victor can help solve her problems. Killing off Victor, if only a fake death, would be a major Genoa City shocker.

Some Y&R spoiler photos have leaked showing key cast in funeral clothes so that could indicate mourners for The Moustache’s funeral. Victor would love to see the Newmans and Abbotts feeling guilty at sending him to jail which caused his “death.”

What do you think Y&R fans? Will Ian and Dr Gates work together to help Victor fake his death and escape the danger behind bars? Can Victor trust Ian with his fate? Share your comments and check back with CDL often for more “The Young and The Restless” spoilers and news.