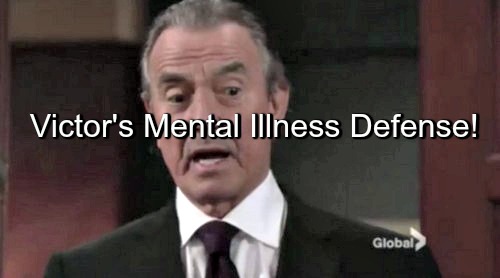 “The Young and the Restless” (Y&R) spoilers reveal that Michael (Christian LeBlanc) will continue to help Victor (Eric Braeden) prepare for trial. Of course, Michael’s idea of “helping” won’t exactly be what Victor had in mind. Michael supposedly plans on throwing the case and that could cause courtroom chaos.

Nevertheless, The Young and the Restless spoilers say there’s a good chance that Victor will get out of trouble. This is how Y&R works. Victor does something evil and just when you think he’s going to pay the price, his family basically forgives him and he manages to get off scot-free.

That’s the standard formula and we just have to accept it.

Since Y&R spoilers fans know Victor will probably get off the hook at some point, we can begin guessing how it might happen. Victor’s sudden medical condition will likely play a crucial part in this storyline. For starters, it will allow Victor to gain sympathy with Nikki (Melody Thomas Scott) and his children.

They’re all pretty fed up with Victor at the moment, but they’ll surely change their tune if Victor’s life is in danger down the road.

That solves one problem, but what about the charges against Victor? It’s possible that Victor’s mysterious illness could get much worse and become apparent in court. It’s not clear what type of condition Victor is battling, but it could be a brain tumor or something similar. A few defense strategy updates could be in order.

Victor obviously knew exactly what he was doing when he swapped Jack (Peter Bergman) for Marco (Peter Bergman), but he may have someone argue otherwise on the stand. It wouldn’t be too hard to bribe a medical expert to say that poor, innocent Victor was simply sick and didn’t know what he was doing. Victor could easily paint himself as a victim.

You can bet that Victor will end up winning over most of the people that have turned their backs on him. Some of them might even be gullible enough to buy the potential medical excuse. We may see people like Victoria (Amelia Heinle) groveling at Victor’s feet eventually. Stick with “The Young and the Restless” to find out if Victor will manage to turn the tide.

So Y&R fans, what do you think about Victor’s upcoming trial? Will Victor’s medical issue come into play? Will the news of his condition help Victor get the verdict he wants? Voice your opinion in the comments below and don’t forget to check CDL often for the latest “Young and the Restless” spoilers, updates and news.