BY Marcy Cohen on April 9, 2016 | Comments: one comment
Related : Soap Opera, Spoiler, Television, The Young and the Restless 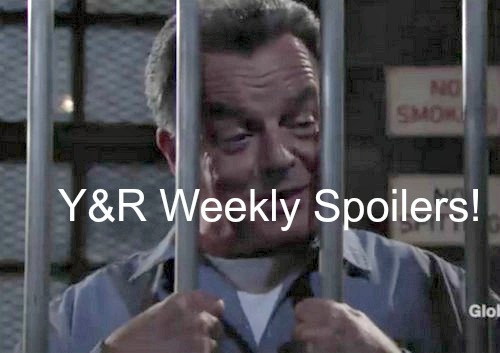 “The Young and The Restless” (Y&R) spoilers for next week’s episodes of Monday, April 11, through Friday, April 15, reveal Victor faces an increasingly hard time behind bars, the Passkey lawsuit heats up, Jack and Billy are at odds, and Phyllis crosses a line.

Here’s what to look for next week on Y&R.

Victor Newman (Eric Braeden) may have to work with Ian Ward (Ray Wise) to survive in prison even though he hates the man. Ian assures Victor that the warden is on the up and up, but is he really? Victor turned down Ian’s offer of protection and then Victor is warned that he’s a dead man.

Adam Newman (Justin Hartley) enlists Dylan McAvoy’s (Steve Burton) help to protect Victor. Dylan makes a call to the warden who admits he has some reservations about some of the guards and suspects they may be corrupt. But can the warden be trusted?

During a talk with the warden, Victor’s stab wound reopens. The warden notices Victor is bleeding and sends him to the infirmary where The Young and the Restless spoilers say he meets Dr Meredith Gates (Alicia Coppola). Dr Gates tends to Victor’s wounds and offers him some advice that he won’t appreciate.

Later, when Ian reveals he’s planning on getting out of jail via escape, it looks like Victor is interested in making a break with his nemesis. But is Ian setting Victor up for a bigger fall? Victor spends some time thinking about his family and how they betrayed him.

It seems like Adam is his only ally. Victor plots revenge against all the Newmans that betrayed him once he resigns himself to the idea that he’s alone in this world. Nikki Newman (Melody Thomas Scott) thinks about better times with Victor, but she’s got worse times ahead.

Y&R spoilers tell us a tipsy Nikki totters out in front of a car and is struck. Jack Abbott (Peter Bergman) comes to see her in the hospital but doesn’t want to lie to cover up her boozing. Nikki has also alienated Sage Newman (Kelly Sullivan) by drunkenly offering to buy her a replacement baby.

Adam comforts Sage who’s upset but this isn’t good for his relationship with Chelsea Newman (Melissa C Egan). Over at Newman Enterprises, Victoria Newman (Amelia Heinle) channels her dad when she refuses a compromise with Jack and presses on with the lawsuit.

Kevin Fisher (Greg Rikaart) and his lady crew try to get their lies straight before the depositions but Michael Baldwin (Christian LeBlanc) catches them scheming (look who’s talking about honesty!) and warns them. Billy Abbott (Jason Thompson) and Victoria face off in depositions.

Y&R spoilers know that Jack is angry that Billy is pushing for revenge against the Newmans yet again. Jack is focused on keeping Jabot afloat and the family legacy intact – it’s the same old argument they’ve always had.

In Billy’s frustration against Jack, he gets closer to Phyllis Newman (Gina Tognoni). Will they act on their feelings – or a better question is when will they?

Ashley Newman (Eileen Davidson) seems to suspect Phyllis may be planning on breaking her brother’s heart and The Young and the Restless spoilers tease she issues some threats about Phyliss hurting Jack. And we have to wonder if we’ll see more of Ashley and Simon Neville (Michael E Knight) soon!

Abby Newman (Melissa Ordway) asks Lily Winters (Christel Khalil) for some advice. Meanwhile, Jack gives Hilary Curtis (Mishael Morgan) the foundation seat she so desperately wants, but it may be yanked right away once Ashley tells Jack about her illness and Hilary’s blackmail.

Hilary brags to Devon Hamilton (Bryton James) that she scored the seat but she may soon regret her hubris. Neil Winters (Kristoff St John) confronts his ex Hilary on her actions but she tells him she got what she wanted. Then Neil reveals she’s about to lose the seat since Ashley tattled.

Max Rayburn (Jared Breeze) continues to act out and his terrible behavior shocks Stitch Rayburn (Sean Carrigan) and even Ashley who defended the kid. Stitch wants peace for the sake of the new baby and Max and Abby commit to stop fighting.

Summer Newman (Hunter King) feels trapped between her parents with this Passkey matter and reaches out to Luca Santori (Miles G Villanueva) for support – as usual Summer’s judgement is faulty. Those two will continue to get close despite Nick Newman (Joshua Morrow) and others warning Summer away from the Spanish bad boy.

Don’t miss any of the action next week on Y&R and check back with CDL every day for day-ahead “The Young and The Restless” spoilers, news and more.