BY Heather Hughes on September 26, 2016 | Comments: one comment
Related : Soap Opera, Spoiler, Television, The Young and the Restless 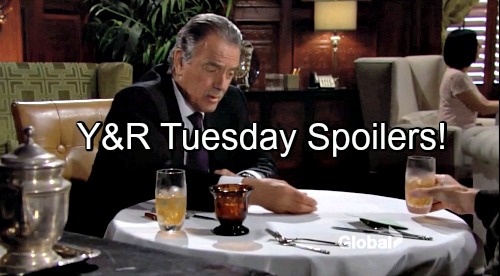 The Young and the Restless (Y&R) spoilers for Tuesday, September 27, tease that Devon (Bryton James) will shift his strategy in an effort to help Jack (Peter Bergman). GC Buzz has targeted Jack in scandalous story after scandalous story. Phyllis (Gina Tognoni) and Billy’s (Jason Thompson) affair set off a media firestorm. Now Jack is the one who’s paying the price.

Phyllis’ fall has prompted some gossip about abuse, so GC Buzz quickly jumped on that. In Monday’s episode, Devon offers the reporter some money to back off. That plan backfires when they air the story AND Devon’s bribery attempt. Devon will realize that things are only going to get worse. He needs do put a stop to all of this as soon as possible.

Tuesday’s preview video shows Devon entering GC Buzz headquarters. He’ll approach the guy who owns the production company. The man will confirm that he’s the one Devon is looking for. He’ll ask if Devon is trying to pay off his reporter.

Devon will likely admit he offered cash to take care of the problem, but it’s clearly a bigger mess than he thought. By Wednesday, The Young and the Restless spoilers suggest that Devon will make another offer. He’ll hope to purchase GC Buzz so he can get his loved ones out of the news.

Luckily, the producer will determine that he just can’t pass up that much dough. Devon will obtain ownership of GC Buzz and he’ll be able to use it however he wants. As a bonus, Hilary (Mishael Morgan) will have something new to keep her attention. Alas, trouble is looming…

Meanwhile, Victoria (Amelia Heinle) will form a partnership of some sort. Since Billy (Jason Thompson) is trying to change his ways, perhaps Victoria will team up with him. Their fighting is what put Cane (Daniel Goddard) in charge at Brash and Sassy, but he may not be calling the shots for long.

This company will always be Victoria’s baby and she doesn’t seem to trust Cane’s vision. Of course, Victoria will have other issues to deal with. Between Jill (Jess Walton) and Victor (Eric Braeden), Victoria has her hands full on a daily basis.

The Young and the Restless spoilers say Victor will meet with Travis (Michael Roark) to discuss a business proposal. Jill tried to lure Victoria away from Travis by tempting him with a cushy job overseas. Victor has something else in mind. He’d rather keep Travis close to make sure he stays in line.

This former bartender may not be Victor’s first choice for Victoria, but he certainly prefers him over “Billy Boy.” Tuesday’s Y&R preview clip shows Victor writing a number on a piece of paper. When Travis asks what the offer is, Victor will shove it in Travis’ direction and ask it it’s enough to keep his daughter happy.

Victoria and Billy will walk in just in time to see the end of this exchange. They’ll wonder what Victor is up to. Victoria will undoubtedly do some major grilling. We’ll give you updates as other details emerge. Stick with Y&R and don’t forget to check CDL often for the latest Young and the Restless spoilers, updates and news.

Buckle Up Travis! Victor is paying you a house call! #YR pic.twitter.com/HUuTsclWWj