The Young and the Restless Spoilers: Victor’s Shocking Memorial Speech – Phyllis Back In Bed With Billy – Cane Tricks Jill 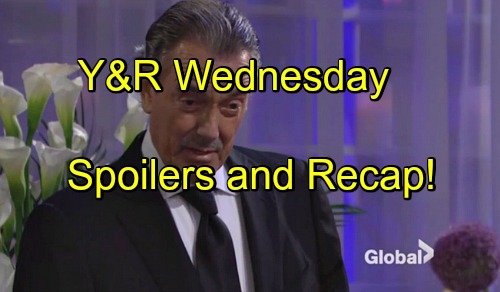 The Young and the Restless (Y&R) spoilers for Wednesday, September 7, tease that Victor (Eric Braeden) will reach out to Chelsea (Melissa Claire Egan). It looks like Victor’s guilt is really taking a toll. Adam’s (Justin Hartley) death was something Victor didn’t see coming.

Victor will vow to protect Connor (Gunner and Ryder Gadbois), but Chelsea will just send her son upstairs with Chloe (Elizabeth Hendrickson). She won’t be sure Victor should even be part of Connor’s life after what he did to Adam. Victor will maintain that he wasn’t behind the explosion, but he’ll admit he feels responsible for what happened.

Chelsea will be somewhat touched by what appears to be genuine remorse. Phyllis (Gina Tognoni, on the other hand, will have no sympathy whatsoever. She’ll be outraged when Abby (Melissa Ordway), Ashley (Eileen Davidson) and Jack (Peter Bergman) seem to be throwing Victor a pity party. Phyllis will contend that Victor just milks incidents like this for all they’re worth.

Jack will insist that he’ll be attending the memorial and paying his final respects. He’ll feel like he needs to at least acknowledge Victor’s loss. Phyllis won’t be able to comprehend how Jack can just put Victor’s destruction out of his head. 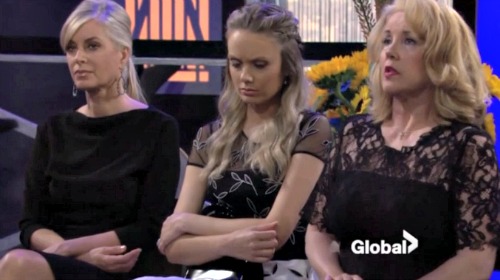 Elsewhere, Victoria (Ameila Heinle) will determine that she can’t desert her family members when they’re in crisis mode. She’ll tell Travis (Michael Roarck) that she’s not going on Jill’s (Jess Walton) proposed business trip. Travis will suggest that Billy (Jason Thompson) hinted at other plans as well. Victoria will be intrigued, but she’ll let it go. Billy’s private life isn’t her concern.

When Cane (Daniel Goddard) shows up at the Chancellor mansion, he’ll gripe to Billy about Jill leaving him out of the trip. Billy will argue that Cane should go. Jill doesn’t have to know until Cane gets home. Cane will eventually decide that’s a decent plan. Later, he’ll call Jill and pretend Billy is going with Victoria like she wanted.

Billy will leave Phyllis a voicemail along with a text. He’ll let her know that he’ll be at the cabin if she’s interested in stopping by. Billy will make it clear that he wants Phyllis there, but he won’t be willing to beg. Phyllis will get the text after her fight with Jack. She’ll choose to take Billy up on the offer.

At the cabin, Billy will be grabbing a drink when Phyllis arrives. She’ll give him updates on Jack’s decision to go to the memorial. Billy will agree that Victor doesn’t deserve compassion. Phyllis and Billy tend to be on the same page. She’ll note how well he understands her as they start kissing passionately.

By Thursday, The Young and the Restless spoilers say Phyllis and Billy will make love. Let’s hope Y&R keeps the “Philly” romance going. It will make the affair exposure more dramatic if Billy and Phyllis remain involved. Stay tuned to see how the rest of this storyline unfolds.

In the meantime, Adam’s memorial will bring his family and friends to Top of the Tower. Jack will have a chat with Connor as they admire Adam’s portrait. When Jack offers his condolences, Victor will be appreciative. Chelsea will also be grateful to Nick to making all of the arrangements.

Nick will start the service with a few words about Adam. Next, Victor will get up to make his spiel. He’ll give Chloe a threatening look and announce that he needs to explain. Will Victor offer any hints about Chloe’s involvement or will he just throw the blame on himself? Stick with the CBS soap to hear Victor’s news.